"Ah, it is them who have awoken me. Let us see if they are worthy to stand before me."
―Akron, Epic Battle Fantasy 3

Akron is the main antagonist and final boss in Epic Battle Fantasy 3. An ancient demonic deity who has lived for billions of years, he was sealed away by the ancient peoples due to his potentially world-shattering power. However, he was accidentally awakened by the heroes themselves at the beginning of the game.

The full details of Akron's birth are unclear, but it is known that Godcat summoned/created him when the Earth was still young. While Akron's own statements suggest it was before life arose, Godcat's (presumably more accurate) account is that he was created when humanity usurped catkind's role and invoked her wrath. He ruled the world for a time, but was eventually defeated by the most powerful warriors the ancient land could muster. Unable to destroy him, the ancient heroes bound Akron in Volcano Peak and forced him into a deep sleep.

Ages passed, and Akron faded into legend, with his volcanic tomb becoming known only as the lair of an ancient evil. The heroic trio of Matt, Natalie, and Lance learned of this legend and set off to destroy Akron to increase their own fame. Finding their way to Akron's tomb, they came upon the chained demon, which appeared to be completely lifeless. Against Natalie's advice, Matt poked Akron with his sword, awakening the deity. Immediately, Akron began sapping the party's life energy, warping the fabric of time and space with his mere presence. The resulting rift hurled the heroes to The Town before Akron could kill them, but the energy drain had left them without most of their previous skills. Infuriated by their weakened state and suddenly aware they may have awoken something best left asleep, Matt, Natalie and Lance set out on a quest to regain their powers and destroy Akron once and for all.

As the party traveled back to the volcano, Akron spent his time trying to restore his own strength, causing the volcano to erupt. His evil power drove monsters across the world into a frenzy, causing chaos and destruction in once-peaceful areas. Akron's increasing strength created maelstroms and whirlpools in the ocean, preventing even the sturdiest ships from sailing - thus, the heroes had to find longer alternate routes to his lair.

As rumors of his return spread, many would-be heroes set out to defeat Akron, only to be stymied by the fierce enemies and natural obstacles in their path. A few even made it to the demonic deity, but their strength only served to empower him when he slew them in battle and absorbed their souls. The few warriors who survived Akron's power or failed to reach him in the first place would remain along the path to the volcano, offering advice and helpful items to Matt, Natalie, and Lance.

Eventually the heroes returned to the tomb, now warped into a bizarre, space-like void by Akron's power. At the center of the void, they battled Akron once more, with the demonic deity pontificating about his past and the strength of his enemies. After an epic battle, the heroes emerged victorious, destroying Akron for good.

In his base form, only Akron's upper body is visible, with the rest of his body buried underground. His upper body resembles that of an armless cadaver covered with bandages, with two long horns growing upwards from his head. Bandages cover the top of Akron's head, the bases of his horns, and his upper torso. Beneath the bandages, he has glowing red eyes. A pair of bat-like wings sprout from his lower back. At the base of his torso is a large gem that changes color depending on Akron's current elemental affinity. Below the large gem, three smaller gems are embedded into the top of Akron's lower body.

Akron's lower body, seen when he raises himself out of the ground, is a shapeless mound of flesh that is several times more massive than his upper body. This mass is dominated by a gigantic, vaguely skull-like face with empty eye sockets and a cavernous mouth framed by enormous fangs. The mouth is capable of spitting out Evil Worms and Evil Tails, suggesting that they are technically part of Akron's body; this is reinforced by several Evil Worms surfacing and disintegrating during Akron's death throes. On each side of the body, slightly above the eye sockets, two large, triangular horns grow out towards the side. The entire mass is covered in bulging growths resembling distorted faces. Akron remains embedded in the ground in this form, indicating that his body is larger still beneath the surface.

Like the Protector, Akron's upper part's appearance in-battle changes as he takes damage; the gems crack, parts of his horns break off, a red-tinted halo appears over his head, the large gem on his abdomen begins cracking, and the bandages on his head come off, revealing his bright red eyes. The changes are often overlooked, only becoming easily visible in later phases, during Akron's death animation and the final scene in the post-battle cutscene.

Akron is unique among enemies and bosses in the game (and to a lesser extent the series) in that he is able to switch between two forms, and the submerged one can switch between several elements (which regulate accessible attacks and resistances) throughout the fight; the current element can be identified by the color of the large gem on its abdomen, and the three next elements planned are displayed by the smaller gems. The submerged form uses only magical attacks, while the raised form uses both types (and is independent of the other form's element), though its physical moves are stronger; both also have many status effects at their disposal.

Akron frequently summons various minions, three of which — Rune Claw, Evil Worm and Evil Tail — are first encountered in this battle. The Rune Claws are able to heal the boss and will also have different attacks depending on the boss' current element. Besides dealing damage, the minions can also inflict status ailments, such as Poison, Instant Death or stat debuffs.

Enters the battle with 50%

Magic Defence buffs, due to the Spawn Claws ability used during intro animation.

Akron cannot be debuffed further than to -20% in any stat.

Akron's elemental affinity and resistance is determined by the color of the large gem on his body, which is randomized at the start and can be changed throughout the battle. There are 6 elemental sets available: Earth (brown), Ice (cyan), Fire (red), Holy (white), Dark (black), Thunder (yellow).

In EBF3, Akron is the only non-player character to have in-battle text. He speaks once every few turns, and his lines are as follows:

Akron returns in Bullet Heaven 2, once again as the main antagonist and final boss of the game. After his defeat in Epic Battle Fantasy 3, half of his body apparently vanished into nothing instead of creating an explosion of darkness. He appears at the end of Darkvoid Galaxy, in its central supermassive black hole.

This section is incomplete. You can help Epic Battle Fantasy Wiki by adding required information to it.
To do: A clear image of the boss itself. 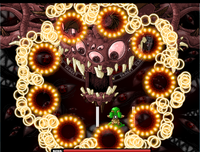 1 of 3
Add photo
Retrieved from "https://epicbattlefantasy.fandom.com/wiki/Akron?oldid=51849"
Community content is available under CC-BY-SA unless otherwise noted.