Start a Wiki
For the same creature's appearance in the main series, see Beholder.

The Beholder is the second boss of Adventure Story. It is fought in Stage 10 (Eye of the Beholder), at the end of the desert. Like the other bosses, it returns for Stage 22, being the second opponent of the boss rush.

The Beholder's appearance is a simplified version of its appearance in the Epic Battle Fantasy series. It resembles an enormous Eyeball with fleshy spikes opposite its massive central eye. The eye is flanked by two smaller eyes on stalks, and a number of tentacles can be seen on its underside. Most of the tentacles remain underground when not attacking, but two are visible in the background, having somehow captured Natalie and NoLegs.

Initially, the Beholder attacks with its tentacles, which erupt from the ground in an attempt to spear Matt. The tentacles generally emerge in groups of four or five, with dotted yellow lines appearing shortly before they erupt - by avoiding the lines, Matt can avoid damage as he attacks the boss. As with the previous boss, the Beholder is vulnerable to all of Matt's attacks, but flashes red and becomes temporarily invincible after every third hit.

Unlike the Giant Bush, the Beholder makes extensive use of summoned enemies to make the battle more difficult. When it raises its body upward, it will summon about four or five Black Bees, and when it bobs backwards, it calls up to three Eyeballs to its aid. These enemies can cause substantial damage (either by themselves or by distracting Matt from the Beholder's tentacle attacks), but they can also provide Matt with a steady stream of HP and MP pickups - when needed, Matt can back away from the Beholder to pick off its minions and regenerate himself. He can also use his magic to hit the boss and its summoned minions at once, but this runs the risk of dropping pickups beside the Beholder, where they cannot be reached unless Matt willingly takes damage and uses the resulting invincibility to grab them.

After losing a third of its health, the Beholder gains a new attack - the ability to fire enormous lasers from its eye. Although devastatingly powerful, these lasers are heavily telegraphed; not only will the boss itself make a certain motion before attacking, but Natalie will make a frantic expression and shout a warning to Matt before the laser is fired. If the Beholder lowers its body slightly, the beam will go straight across the bottom of the stage, but if it looks up at an angle, the beam will sweep over most of the upper platforms. Matt can take advantage of the fact that the Beholder will aim its attack in his general direction by standing on the small rock pillar directly in front of the boss - the Beholder will usually aim its laser upwards if this happens, while Matt can simply drop down to the lowest level of the stage and get a few hits in. The laser also destroys enemies caught in its path, which Matt should also take advantage of when possible.

When the Beholder's health is down to a third, its attacks will become slightly more frequent. It also replaces its straight laser with a variant that is fired at a lower angle before being swept up to the bottom part of the stage, but this is actually easier to evade, due to being more visibly telegraphed. On the other hand, more tentacles will appear per attack, and enemy reinforcements will be a continued nuisance, so Matt should continue to focus more on keeping himself alive than finishing off the Beholder. With careful management of the enemies, judicious use of Heal and Temper, and a sharp eye for the boss's attacks, the Beholder can be slowly worn down.

After the difficult battle, the Beholder will be knocked onto its "back," shedding a tear as its eye stalks go limp before its whole body fades away. As it lacks a final attack like the Giant Bush, all Matt will have to worry about is finishing off any remaining foes before proceeding to the final section of the level.

In the boss rush, the Beholder is fought on a smaller stage that has replaced most of the upper platforms with a pair of stones that will temporarily disappear after Matt steps on them, limiting the player's maneuvering room. 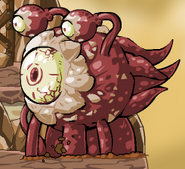 The Beholder's appearance after taking some damage.

The Beholder fires its eye laser as two Eyeballs fly in to reinforce it. 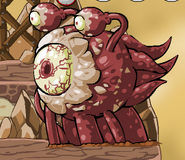 The Beholder's appearance as it nears defeat.

Matt defeats the Beholder.
Add a photo to this gallery

Retrieved from "https://epicbattlefantasy.fandom.com/wiki/Beholder_(Adventure_Story)?oldid=58063"
Community content is available under CC-BY-SA unless otherwise noted.