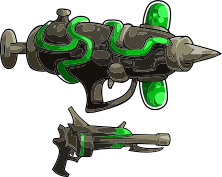 The Biohazard Blaster is a Bio-elemental gun available for Lance in Epic Battle Fantasy 5.

The Biohazard Blaster is a large gun resembling a syringe, with a plunger in the back and a needle instead of a barrel. These parts, along with the trigger and a few other pieces of the gun, are a warm grey to contrast the rest of the frame, which is black. A pair of transparent (presumably glass) capsules flank the needle at the front, filled with an insidious green fluid that can also be seen flowing through the tubes lining the gun's surface. If the Biohazard Blaster is equipped while Lance wears the Ninja Gear or Coat of Teeth, the mysterious liquid looks red instead of green.

The Biohazard Blaster colors Lance's revolver black or dark grey, with bright green accents and a small black blade under the barrel.

The Biohazard Blaster has slightly below-average Attack and Magic Attack, along with a great HP boost only matched by the Desert Scorpion. Its Bio boost is minimally useful to Lance, only improving Poison Gas and Acid Blast; instead, he should focus on the gun's ability to inflict the rare Virus effect with its weapon-elemental skills. These skills also drain enemy HP, helping Lance endure their attacks while he waits for Virus to wear them down.

The Biohazard Blaster is also notable for its incredibly high Bio resistance, allowing it to greatly reduce the negative effects of Virus if it spreads back to Lance. By the time it reaches Level 4, Lance can turn pure Bio-elemental attacks, Virus, and Poison into free HP regeneration. At maximum level, the gun automatically Poisons Lance between turns, essentially giving him a makeshift Regen effect even before he catches Virus. Equipping other Bio-resistant equipment can further amplify the benefits Lance receives from Bio damage, although they may be better served on other party members to reduce the risks of fighting alongside him while he uses this gun.

Although Lance has much better options for direct offense, the Biohazard Blaster is an indispensable asset for Virus strategies. Compared to the Beholding Eye - the only other weapon that naturally inflicts Virus on hit - it's better suited as the party's main source of the status, due to higher Bio resistance per level and a lack of effects to support Lance's allies. Late in the game, other party members can become even more efficient at starting a Virus outbreak by using their multi-target weapon-elemental skills with the Tentacle Flair, but the Biohazard Blaster remains a mainstay of Virus parties that can endure a lot more damage than its stats would suggest.

The Biohazard Blaster resists Water and Bio; while the former caps out at 50%, the latter a rare instance of a weapon granting absorption for an element, hitting 150% at maximum level.

The Alt Biohazard Blaster has the second-best defenses of any gun in Equip Remix, only beaten by the Alt Coconut Shooter (and the Alt Heavy Claw in terms of Defence). Unfortunately, it also has the worst overall offenses of any gun outside of the Alt Coconut Shooter and the Alt Accelerator, lending itself to a supportive role. To this end, it improves Lance's debuffs and allows his weapon-elemental skills to drain HP, inflict Random status effects, and sharply debuff Magic Defence (the latter of which benefits from its debuff boost). These skills can also unleash Acid, dealing minor magical Bio damage while giving Lance another means of lowering the target's Magic Defence.

In comparison to the Alt Accelerator, the Alt Biohazard Blaster is available earlier, lacks stat penalties, and gets the valuable debuff boost from the start, but loses a buff boost and guaranteed auto-Haste. Although its HP-draining effect is somewhat underwhelming off of its poor Attack stat, it can still help Lance's survivability while he cripples foes for his magically-inclined allies. Status-changing Flairs are advisable in order to give it better consistency; depending on party composition, the status can also be used to further amplify elemental magic attacks.

The Biohazard Blaster is found in a chest inside the Grand Gallery's 50 Medals Room, on the right side of the left alcove. The chest is guarded by a battle that appears as a Snow Bat.