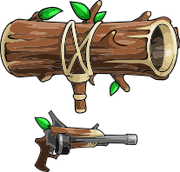 The Coconut Shooter is a Earth-elemental gun available for Lance in Epic Battle Fantasy 5.

The Coconut Shooter is a large log that has been hollowed out to act as a crude bazooka. It has the remains of a large branch sticking out of the middle, which has been wrapped with light brown string to form a grip. Several smaller twigs dot the rest of the log, many of which still have one or two green leaves clinging to them. It is unclear how it functions as a gun, but its name implies that it somehow fires coconuts.

The Coconut Shooter gives Lance's revolver a brown wooden frame, with lighter brown tips near the barrel and a small green leaf on the back end.

The Coconut Shooter provides a large boost to Attack along with a mediocre boost to Magic Attack. It also bolsters both of Lance's defenses, but somewhat lowers his Evade. Its Earth-elemental boost isn't something Lance can exploit with his natural skills, but it provides some options of its own via its Stone Fist unleash and the Lumber it can cast between turns. Both skills can also inflict Stagger, complementing the natural status inflicted by the gun's weapon-elemental skills.

While outclassed by the likes of the Deep Blue and the Heavy Claw for pure physical offense, the Coconut Shooter is an interesting gun with some offensive support capabilities; it allows Lance to dish out solid damage while setting up critical hits via its on-hit status. However, Stagger combos can be complicated by the risk of the gun's unleash consuming the status; Stone Fist has a Stagger chance of its own, but with an unreliably low infliction rate. As such, the Emerald Smasher may be a superior option for Staggering foes, especially since Matt has some natural Bio skills to exploit its elemental boost.

The Coconut Shooter provides resistances to Water, Earth, and Bio. None of these will become an immunity at Level 5.

The Alt Coconut Shooter boasts the best HP and Magic Defence of any gun, as well as a Defence stat only matched by the Alt Heavy Claw. Unfortunately, it also halves Lance's Attack and Magic Attack, rendering its Earth boost useless. Fortunately, its other Equipment Effects complement its defensive role; it boosts healing skills, can inflict Tired with Weapon-elemental skills, grants Bless when Lance Defends himself, and rarely summons a Stumpy Gloop to give Morale to the entire party.

Since Lance is rather lacking in terms of supportive capabilities, the Alt Coconut Shooter is mostly limited to being a Target-tank weapon, where its sheer bulk and on-Defend Bless protects him from damage and status effects alike. Even then, it's rather niche since Matt or NoLegs tend to perform better in this role; if Lance wants to support the party, he's better served by the likes of the Alt Accelerator or the Alt Biohazard Blaster.

The Alt Coconut Shooter resists Water, Earth, and Bio, becoming immune to none of them at Level 5.

The Coconut Shooter is found inside a chest in the Mystic Woods, right after entering from Greenwood Village; the chest is guarded by a battle that appears as a Green Bush.