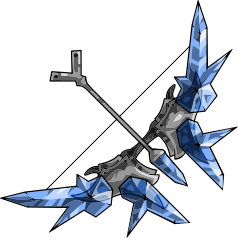 The Cold Steel is a Ice-elemental bow available for Anna in Epic Battle Fantasy 5.

The Cold Steel is a small bow comprised of silver metal, with limbs that resemble a pair of crab claws. Large blue ice crystals extend from the tips and front of its metal limbs; the former extend the bow to the length of Anna's other weapons, while the latter give it a pair of vicious-looking frontal protrusions. The bowstring is attached to the icy parts of the bow's limbs; it doesn't appear to be tied around them, implying that its ends are frozen within the ice to secure it.

The Cold Steel is a fairly well-rounded offensive weapon, with slightly above-average Attack, slightly below-average Magic Attack, and small bonuses to Defence and Magic Defence at the cost of a minor Evade penalty. Its Weapon-elemental skills have a small Freeze chance and a good chance of unleashing Iceshard for extra damage and another small Freeze chance. It also counters with a Normal Attack, which will in turn lead to Iceshard being cast.

The Cold Steel boosts Ice skills, which Anna can exploit with Frost Flurry and the bow's own unleash; however, the latter is slightly underwhelming due to being a magic attack while both the bow and Anna herself are more physically-focused. Its innate Freezing abilities are negligible, particularly when compared to weapons like the Book of Spells; if Anna needs to Freeze things, it's probably better to use Frost Flurry or Absolute Zero with a status build. On the other hand, the bow is obtained shortly before the Rainbow River and the Frozen Valley, where its resistances can be put to good use.

The Cold Steel resists Water, Ice, Chill and Freeze, up to an immunity for the latter two at Level 5.

The Alt Cold Steel has good Attack, barely-existent Magic Attack, and a bit of extra HP and Evade. Its Weapon-elemental skills can Chill foes on hit, increasing the damage they'll suffer from Ice and Water attacks; conveniently, the bow happens to boost both elements on its own. Between turns, it can summon a Blue Crystal or a Glacier Eater; neither is particularly powerful, but their high Freeze chances have plenty of synergy with the bow's Chill infliction.

Compared to the Alt Aquamarine, the Alt Cold Steel is better used for straightforward offense; its superior Attack allows Anna to better exploit its elemental boosts with her natural skills. It retains a good amount of Freeze utility, with a better on-hit Chill chance and two Freeze-inflicting auto-summons, but the Alt Aquamarine is better at setting up Freeze on all foes at once (especially if paired with other sources of Chill and Wet).

The Alt Cold Steel has Water, Ice, and Wind resistance. None of them become an immunity at Level 5.

The Cold Steel is found in the last section of the Mystic Woods, in a chest on the northern shore of the lake. The chest can be reached by using the Raft obtained on the same screen.