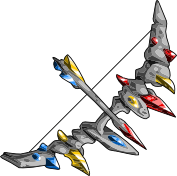 The Crystal Bow is a non-elemental bow available for Anna in Epic Battle Fantasy 4. It is exclusive to the Steam release of the game and the post-Battle Mountain update version of the Premium Pack.

The Crystal Bow has strong Attack and Magic Attack, but no other stats. It is most notable for its eclectic combination of elemental skills: it unleashes Frost Arrow with weapon-elemental skills, counters attacks with Spark Arrow, and randomly casts Fire Crystals between turns. While this allows Anna to deliver a variety of elemental attacks and status effects, the bow's lack of an elemental boost and the fact that each element is tied to a specific action means that she may need to tailor her build to favor one skill at a time to maximize its effectiveness.

The Crystal Bow resists Fire, Ice, and Thunder, with none becoming immunities at Level 5.

Found on the Battle Mountain, specifically in a chest at the top of the Diamond Golem screen, accessible after beating the nine-wave foe rush with foes from Crystal Caverns. A Battery is required to get this far, used to open a door a few screens ago.