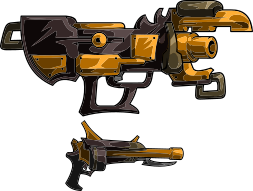 The Desert Scorpion is a Bomb-elemental gun available to Lance in Epic Battle Fantasy 5.

Fitting its name and theme, the Desert Scorpion is a primarily dark brown and yellow weapon. It has an assortment of peculiar protrusions, possibly meant as secondary grips or places to attach accessories of some sort. The barrel of the gun is flanked by two yellow protrusions that resemble a scorpion's tail or pincer.

The Desert Scorpion comes with a dark brown revolver with a small blade under its dark yellow barrel.

The Desert Scorpion gives average boosts to both Attack and Magic Attack, as well as patching up both defences and HP. It will cast Sand Dune with single-target Weapon-elemental skills - while this doesn't benefit from its elemental boost, it offers a chance to inflict an Accuracy debuff and Dry on the target. The gun itself can Dry foes on hit in addition to giving them a decent Attack debuff; coupled with its unleash and solid defensive stats, it's a fairly tanky weapon, much like the Quake Maker from EBF4.

However, the Desert Scorpion can also be a useful (if mildly unorthodox) offensive weapon that can automatically boost its own attacks. Since it has a Bomb boost and three different ways of applying Dry (its on-hit status, its Sand Dune unleash, and the Sandstorm it randomly casts between turns), it can make Lance's high-power Bomb skills even more devastating. However, most of Lance's Bomb attacks suffer from lengthy cooldowns, meaning that the Desert Scorpion is typically more useful in a supporting role; if used offensively, Lance should learn Big Bullet and/or Energy Barrage to have a source of Bomb damage while he waits for his natural skills to cool down.

Compared to Lance's other Bomb-elemental guns, the Desert Scorpion is the best defensive/support option; however, the Nitro Bomber XL and the Heavy Claw have superior magic and physical offense, respectively. As a Drying tool, it runs into competition from the Obsidian Staff, which allows Natalie to apply Dry and Invisible with a single Normal Attack; on the other hand, the Desert Scorpion can debuff foes on hit and potentially Dry multiple targets at once.

The Desert Scorpion resists Fire, Earth, Wet and Dry, with the latter two becoming an immunity at Level 5.

The Alt Desert Scorpion is an Earth-based gun with strong Attack, average Magic Attack, and modest Defence and Magic Defence. Its abilities are built around maximizing Earth damage; its single-target Weapon-elemental skills have a great chance to inflict Stagger and a small chance to unleash Cataclysm, while its semi-frequent auto-skill can make foes Heavy and even more vulnerable to the Earth attacks that benefit from the gun's elemental boost.

The Alt Desert Scorpion resists Fire, Earth, and Thunder, becoming immune to none of them at Level 5.

The Desert Scorpion is found inside a chest in the eastern desert of Hope Harbor, one screen south of the Slime Cat. The chest is guarded by a battle that appears as a Camel Mammoth (a War Mammoth if Foe Remix is enabled), and the area is only accessible from a ladder in the Ice Cave that requires the Spiked Boots to reach.