Previously on Epic Battle Fantasy 3, the ancient demon Akron was destroyed by three young adventurers and their pet cat. Matt the warrior, Natalie the magician, and Lance the gunman had saved the world and become living legends. Afterwards, the heroes pillaged towns for a living, because they could get away with it. They saved the world from certain destruction, after all, so it may be argued that they earned the right to everything within it. This behavior quickly made them many enemies.

Fast forward to today: A sacred jewel was just stolen from the village of Greenwood. Local legends say that terrible things will happen if this jewel falls into the wrong hands. Anna, a young ranger and a resident of Greenwood, was very upset by this news. Anna quickly prepares to chase down the infamous trio who were spotted nearby, and who she suspects might have taken the jewel. Eventually, it becomes apparent that while the party did in fact steal from Greenwood, they were not responsible for the theft of the crystal. The party then joins Anna on a quest to reclaim the crystal. Early on, they are challenged by the treant Mighty Oak, who joins the party (as Anna's Limit Break) after they prove their worth.

Their path leads them through the Crystal Caverns. Inside, after defeating the Crystal Golem, the party is ambushed by a mysterious, glowing, cat-like figure. They barely survive the encounter, and learn in the nearby town of Whitefall about the legend of Godcat - a creator goddess who created the cats in her image and humans as their servants. The party suspects that someone is trying to steal the three crystals and revive Godcat, so she may purge the world of humans and restore the cats' reign over the Earth. This is confirmed when Whitefall's crystal is stolen. Clearly, by this point the quest is no longer merely a hunt for a thief but rather a race to save the entire world from destruction at the hands of its creator.

The party needs to go to Goldenbrick Resort in order to prevent the heist of the last crystal, but to do so they need a powerful hammer with which to smash the boulders blocking the road. They venture into the depths of Whitefall's Waste Disposal Plant in order to retrieve a hammer rumored to be inside, but soon find that a rogue A.I. has taken over the facility, and due to budget cuts the staff was unable to prevent it from hacking into the Plant's alarmingly large array of deadly weaponry and high-tech robots including the powerful Praetorian. After a grueling battle, the party defeats the robot (which Lance hacks into joining the party as a summon), finally obtain the hammer and continue on the path to Goldenbrick. Their progress is further impeded by the collapse of a bridge, forcing them to take the long route through Lankyroot Jungle.

Before leaving the jungle, the party is once again met with opposition from Godcat (although a darker-looking one). The party once again barely survives as Godcat is still unable to sustain a physical form. After destroying a dangerous carnivorous plant known as Rafflesia that was blocking the way, the party rushes to Goldenbrick. Unfortunately, our heroes find that a group of cats has stolen Goldenbrick's crystal as well. The party chases the cats deep into the Temple of Godcat, where they witness the resurrection of Godcat. After a final climactic duel, Godcat expresses empathy for the party's bravery and recognizes the worth of the human race, deciding to spare this world and leave to create another one. The cats who stole the crystals in the first place were also honored for their bravery and lived in the stars with Godcat forever after. The party then returns to Greenwood, where they celebrate and live happily ever after (until the next game?)... 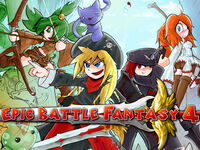 Cover art for EBF4, made by ptolemaiosLS. Click here for the full image. 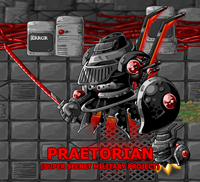