Festivals are events that occur during certain times of the year. They first appear in Epic Battle Fantasy 5, though similar effects happen in the fourth game and were cut from the third game.

Each Festival has a corresponding NPC that appears in the Warp Zone with a quest. Enemies have a chance to drop a Festival-specific item, which is used to both complete the Festival quest, and to upgrade some of the Festival-specific items. Drop rates for these items depend on which box is required to capture the foe; the bigger the box, the higher the drop rates (note that this is only used as a way to measure foe strength; it's not necessary to actually capture a foe for it to drop the items), with the foes requiring the largest box also having a chance of dropping a second item.

During a Festival, Equipment Shops will also have some exclusive items to sell, and some NPCs only appear during Festivals to gift the party a few items.

Multiple Festivals can run at the same time. In this case, enemies may drop each of the applicable festival items.

If you save in the Warp Zone, the location of the Festival NPCs is also saved, so if the active festival changes before you next load the game, you will need to exit the Warp Zone and return to update which NPCs are there.

Festival timing relies on the system clock, therefore you can cheat by changing the system clock or using applications such as RunAsDate (the latter method only works if you're playing the PC version).

The Chinese New Year Festival occurs between January 18 and February 25. It loosely corresponds with the Chinese Lunar New Year, which typically takes place sometime between the two given dates.

An NPC named Jin appears in the Warp Zone. He has a quest that requires 10 Red Envelopes and 5 Gunpowder. The rewards are the Firecrackers skill and the Coin Charm flair.

An NPC named Amy appears in the Warp Zone. She has a quest that requires 10 Heart Chocolates and 1 Cupcake. The reward is the Love Blade, 1 Diamond and 1 Espresso.

The Easter Festival occurs between March 14 and April 30.

An NPC named Bunni appears in the Warp Zone. She has a quest that requires 30 Easter Eggs and 1 Coffee. The reward is the Heaven's Voice bow, 1 The Holy Grail and 1 Orange Juice.

The Halloween Festival occurs between October 1 and November 7.

An NPC named Jack appears in the Warp Zone. She has a quest that requires 25 Halloween Candy and 3 Pumpkins. The reward is the Coat of Teeth, Spider Gown and 20 Pumpkins.

Equipment shops sell the Pumpkin Head and the Spider Bobble for 300 coins each.

An NPC named Necron appears in the slime cat screen of the Mystic Woods. He gives the party 10 Halloween Candies and 2 Dark Runes.

The Christmas Festival occurs between December 1 and January 7.

An NPC named Sally appears in the Warp Zone. She has a quest that requires 25 Candy Canes and 1 Pretzel. The reward is the Santa Outfit, Santa Skirt and 1 Espresso.

Equipment shops sell the Santa Hat and the Holly Hairpin for 300 coins each.

An NPC named Santa appears in the slime cat screen of the Frozen Valley. He gives the party 10 Candy Canes, 2 Espresso and 1 Star Fragment.

In Epic Battle Fantasy 4, if your computer clock is set to December, Big Snow Slimes will appear adorned in Christmas decorations, and Christmas-themed gear becomes available at the Equipment Shop; the Santa Hats and the Santa Outfits, In EBF3, there are three unused Giant Slime bodies representing Easter, Halloween and Christmas. The seasonal decorations are identical on all Slimes; the only difference is the color of the Slime itself. The Easter version of Giant Blue Slime and the Halloween version of Giant Green Slime stand out due to unique body colors: the former is white instead of the Slime's normal blue/cyan color, and the latter is orange instead of green. In EBF4, these Easter and Halloween bodies are still present, but only one is used — a distorted version of the pumpkin Slime appears as one of The Glitch's idle sprites. The Christmas Slime's decorations were slightly altered and used for the Big Snow Slime's December version. 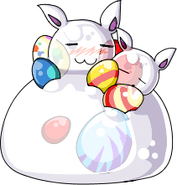 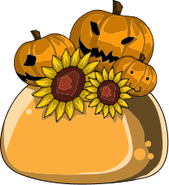