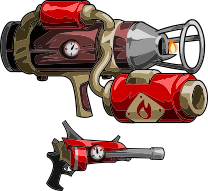 The Flame Titan is a Fire-elemental gun available for Lance in Epic Battle Fantasy 5. It is currently exclusive to the paid Steam release of the game and the outdated free Battle Demo.

The Flame Titan is a giant copper flamethrower with brass detailing, a silver muzzle, and two red fuel canisters; a large one mounted below the muzzle and a smaller one on the back of the gun. The larger fuel canister has a brass-colored sign on its side, labelled with a small red flame design to indicate its contents. A small, circular analog pressure dial is mounted on the main body of the gun, and a small protrusion from its muzzle acts as a pilot light.

Equipping the Flame Titan gives Lance's revolver a predominantly red frame with silver details, a black grip, and a small pressure dial on the side.

The Flame Titan has the second-highest Magic Attack of any gun (tied with the Vortex Cannon and surpassed only by the Green Goliath), but this comes at the cost of slight Accuracy and Evade penalties and the second-lowest Attack of any gun (tied with the Shadow Blaster and only ahead of the Vortex Cannon). Its boost to Fire skills works well with Lance's natural abilities, but the Burn it can deliver with weapon-elemental attacks is largely irrelevant, especially given its lacking Attack. Additionally, it can make Lance Heavy between turns, essentially reducing (but not eliminating) its Earth resistance while amplifying its Wind resistance.

The Flame Titan is essentially a Fire-elemental counterpart to the Vortex Cannon, with the exact same Magic Attack and Accuracy/Evade penalties, and it usually outperforms it unless Lance is specifically focusing on Wind damage. It lacks the Vortex Cannon's bulk and bonus skills and its slightly higher Attack is negligible at best, but its elemental boost tends to be far more useful; not only do Lance's natural Fire skills have more base power compared to the shared Wind skills he can learn, Fire tends to be a far more common weakness than Wind in EBF5.

Overall, the Flame Titan has a strong claim to being the best option for Lance's magic attacker build; it is suitable as the core of the party's offense, with Lance's allies providing the buff, debuff, and status support he needs to maximize his damage output. If Lance needs to support the party in addition to applying literal firepower, the Hellfire Shotgun has more versatile stats and effects in exchange for significantly less Magic Attack.

The Flame Titan resists Earth, Wind, Heavy and Light. It becomes immune to the latter two when maxed, though this will not prevent the self-inflicted Heavy.

The Alt Flame Titan turns Lance into a walking artillery piece; inaccurate and rather predictable, but able to burn down his enemies in record time with the proper support. It has significant penalties to Attack, Accuracy and Evade, but its top-notch Magic Attack is ample compensation. Although it doesn't boost Fire skills on its own, it can inflict Dry with some weapon-elemental attacks to increase Fire and Bomb damage, and between a Flame Shot counterattack and a chance to automatically Charge up Lance's Hyper Beam, it has more than a few options to capitalize on the status itself.

Unfortunately, the Alt Flame Titan has a high chance of making Lance Tired between turns, compounding his Accuracy and Evade issues. This often necessitates support from his other equipment or his teammates to ensure that he's able to consistently hit his targets while avoiding unnecessary damage in return, but the gun's raw power makes it one of his best magical offensive options if he can surmount that hurdle.

If the Alt Flame Titan's penalties are too problematic, the Alt Heartstopper is another option for extreme magical power at a price; the Alt Flame Titan's main advantage over the latter is superior durability (due to lacking an HP penalty and the Alt Heartstopper's serious issues with Doom). On the other hand, the Alt Shadow Blaster is a more reliable magic-focused gun with a Fire boost, although the drop in damage output is substantial. If the player doesn't mind taking a more physical approach, the Alt Hellfire Shotgun has good damage output for a Fire attacker, although its Berserk infliction may become an issue and its elemental boost still leaves Lance's natural Fire skills weaker than they would be with the Alt Flame Titan.

The Flame Titan is found inside a chest in the Freezeflame Dungeon, one screen east of the entrance; the Slip 'n' Slide puzzle must be solved to reach the chest.