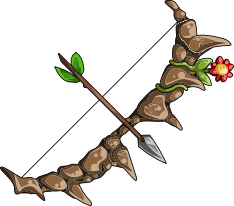 The Gaia's Bow is an Earth-based bow available for Anna in Epic Battle Fantasy 4.

The Gaia's Bow appears to be made of cracked brown earth, with a single red and yellow flower growing on the upper limb. The flower also has two leaves and a small green vine that wraps around the bow's limb. The arrows are similar to the Fairy Bow; made of wood, with two green leaves for "feathers" and a pointed head seemingly carved from stone.

The Gaia's Bow is a rather bulky weapon, providing substantial bonus to Anna's HP, Defence, and Magic Defence; on the other hand, its offensive stats are mediocre at best. Its weapon-elemental skills can Stun foes and unleash Bulb Blast for some extra damage and a chance of Stagger; these effects allow Anna to take some pressure off of the party or set up an ally for greater damage. The bow also empowers Earth attacks, although they still won't be too powerful coming off of its poor offenses.

The Gaia's Bow protects Anna against Earth and Poison attacks, as well as the Tired status effect.

Found in Ashwood Forest, in the top-right chest of the boss area screen, accessible after beating the Mighty Oak. It is blocked by a tree, but The Axe is obtained earlier on the same screen.