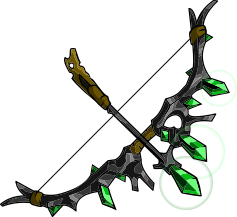 For the similarly-named bow in EBF4, see Gaia's Bow.

Gaia's Gift is a Earth-elemental bow available for Anna in Epic Battle Fantasy 5.

Gaia's Gift is made out of a crystalline black material that resembles hematite (Fe2O3). Several small Emerald crystals are embedded in the front edge of the bow, and leather is wrapped around its middle (to act as a grip) and the tips of its limbs (to attach the bow string). Its arrows are made of the same Hematite-like material, with a large emerald crystal serving as a head and a strip of leather wound around the back of the shaft to act as "feathers."

While Gaia's Gift provides very low offensive stats (which largely wastes its boost to Earth skills), it has a significant HP bonus and moderate boosts to Defence and Magic Defence. Its most notable trait is its ability to inflict the rare Invisible status via its Invisibility unleash, doubling ally magical damage. Its Weapon-elemental skills can also inflict Heavy on enemies; while Anna can try to exploit this with her own Earth skills, it's generally better to let her more offensively-inclined allies do this. Additionally, the bow empowers Anna's healing spells and occasionally gives her Regen between turns, further reinforcing her endurance and supportive capabilities.

Compared to the Earth's Whisper, Gaia's Gift is the more defensive option for an Earth-based bow. With substantial bulk, three elemental resistances, and auto-Regen, it gives Anna significant staying power while she heals and supports the party. Its Invisibility support is especially appreciated by offensive builds for Natalie or a magic-focused Lance; its main advantage over the Obsidian Staff is much better bulk and potentially allowing for two magically-inclined party members to exploit the Invisible status instead of one.

Gaia's Gift resists Earth, Bio, and Dark, but it won't be immune to any of them at Level 5.

Alt Gaia's Gift is an offensive bow with above-average Attack and stellar Magic Attack. It improves the power of Earth and Bio skills and provides means to further increase their damage: its Weapon-elemental skills can inflict Heavy to amplify Earth damage, and it casts Gaia Blossom as a counterattack, which can inflict Tired to enhance Bio damage (or just debuff the victim's Evade and Accuracy over time) while also dealing decent damage on its own.

While Anna will be reliant on shared skills to make full use of its elemental boosts, Alt Gaia's Gift has the Magic Attack and self-boosting capabilities to turn her into a decent magical attacker. Alternatively, it can be used to amplify allied Earth and Bio attacks with its status application.

Gaia's Gift is found inside a chest in the Forgotten Ruins, on the northern edge of the left cliff. The chest is guarded by a battle that appears as a Crucified Fallen.