The Giant Bush is the first boss of Adventure Story. A massive Green Bush that is apparently controlled by Lance, it serves as the guardian of the first area on Matt's quest to save Natalie.

It appears in Stage 5, "Bush Battle", and in Stage 22, where it is the first opponent in the boss rush.

The Giant Bush is vulnerable to all of Matt's offensive abilities. However, it distinguishes itself from the lesser enemies fought up to this point by gaining temporary invincibility after being hit three times - when the boss begins flashing red, fall back and wait for its invincibility to wear off.

In the boss rush, the stage is smaller and the main floor is covered with retractable spikes, both of which can impede Matt's ability to fight the Giant Bush.

The Giant Bush's main attack is to breath a stream of green bubbles from its mouth (similar to an Evil Mushroom, but on a larger scale). The bubbles can be deflected with Matt's sword attacks, but he can still take damage if he is standing too close to the boss when it attacks. The Giant Bush also attacks by jumping in place, creating a damaging earthquake and summoning a pair of Green Bushes from its body. Damage can be avoided by jumping just before the boss lands, and the small Bushes can be destroyed with normal attacks. Once again, being too close to the boss when this attack happens can be disadvantageous, as the Giant Bush's body may block the pickups dropped by its minions if they are knocked back too far.

After losing a third of its health, the boss will adopt an angry expression and gain new abilities. It will randomly add a powerful wind gust to its bubble attack - although this does no damage, it may push Matt off of the stage, dealing heavy damage. In general, using the walking attack (pressing the attack key while moving) will minimize the threat of the wind while simultaneously deflecting the bubbles. Lance will also begin contributing to the battle by tossing large bombs from his perch; Matt should be wary of the explosions, but he can also use his sword to knock the bombs into the Giant Bush, dealing significant damage to it. Since Lance can throw bombs anywhere on the stage and he won't aim specifically at Matt, the easiest way to deflect them is to intercept them in midair with Matt's spinning slash (jump and press the attack key). If a bomb cannot be deflected back into the boss (e.g. if Matt is attacking when Lance throws a bomb), it should be knocked off the stage or simply avoided.

After losing another third of its health, the Giant Bush will show a tired expression. In this state, it can still use its bubble and quake attacks, but much less frequently than before; as such, Lance will step up his bomb-throwing attacks. At this point, Matt can simply back off and deflect bombs into the boss until it collapses in defeat - however, he should keep his distance even after the Giant Bush falls. Not only will Lance's remaining bombs detonate around the fallen boss, but the Giant Bush itself will leave about five Green Bushes behind, which must be defeated or avoided until the teleporter to the final part of the level becomes available. 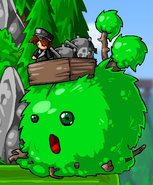 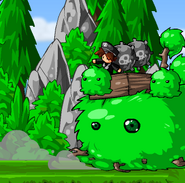 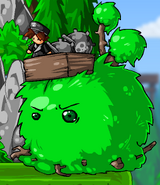 The Giant Bush's angry expression, donned when it loses about a third of its health 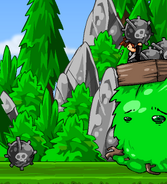 Lance throws bombs from atop the Giant Bush, who adopts a tired expression when it loses two-thirds of its health 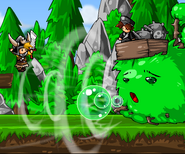 The Giant Bush adds a gust of wind to its bubble attack as its health dwindles
Add a photo to this gallery
Retrieved from "https://epicbattlefantasy.fandom.com/wiki/Giant_Bush_(Adventure_Story)?oldid=59794"
Community content is available under CC-BY-SA unless otherwise noted.