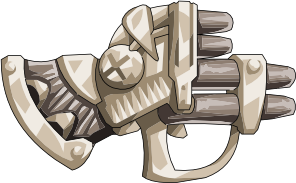 The God Hand is a gun available for Lance in Epic Battle Fantasy 3 and 4.

The God Hand is a rugged cannon seemingly made out of the same off-white material as the Kitten Kingdom Ruins and the Temple of Godcat. It has four grey barrels, with the lower two being much longer than the upper two and connected by an off-white piece that also appears to attach to the trigger guard. The body of the gun is decorated with an elaborate pattern which vaguely resembles a face; coupled with the design of the barrels and the trigger, the weapon resembles a hand making an upside-down "finger gun" gesture.

The God Hand is a defensive gun with a decent HP boost, a Holy resistance, and the ability to drain HP with Lance's weapon-elemental skills. Unfortunately, its stats are generally too low to make it especially useful, despite its draining abilities.

The God Hand has some of the weakest offenses of any gun (only ahead of the Ark Angel due to a small Attack bonus) on top of modest Accuracy and Evade penalties, but decent HP and minor defensive boosts give Lance respectable bulk. Its Equipment Effects add to its tanking utility, giving Lance the ability to drain HP with weapon-elemental attacks and further buff his defenses with Unleash. Although it's considered a Bomb-elemental weapon, it doesn't increase the power of Lance's Bomb skills.

The God Hand resists Holy, Death and Doom, becoming immune to the latter two at Level 5.

The God Hand is a Holy gun with mediocre offensive stats and decent boosts to HP and MP; notably, it is the only gun that increases both of the latter. It empowers Holy skills and gives Lance's weapon-elemental skills an HP-draining effect and a chance to unleash Stone Fist for mild physical Earth damage and a small chance of Stagger.

Despite being reasonably tanky and having useful resistances for the final stages of the Temple of Godcat, the God Hand has little synergy with Lance's abilities, especially considering how late it becomes available. Its draining abilities are theoretically useful for keeping Lance alive, but they're hampered by its relatively low Attack and lack of a weapon-elemental counter skill. The Quake Maker is a better option for a bulky gun, while the Thunder Core, the Sub Zero, and the Ultra Zapper have better MP boosts; additionally, all of these weapons have superior offensive output.

The God Hand resists Holy and Weaken, with only the latter becoming an immunity at Level 5.

The God Hand is found inside a chest in the restricted area of Rock Lake, which becomes accessible after getting 20 Medals. The chest is at the end of the pier to the right of the ambush battle.

The God Hand can be bought in the Goldenbrick Resort Equipment Shop for 70,000 gold.