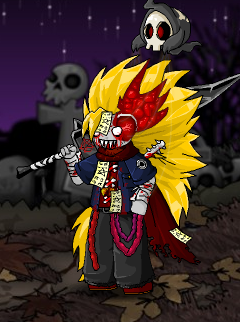 Goku appears as a recurring antagonist in the works of Matt Roszak; so far, he has appeared as the final boss of Epic Battle Fantasy and Brawl Royale. He originally appeared at the end of No Name (where he killed everyone). Matt later killed him in the events of FF Battle; since then, he has appeared in the form of a zombie.

In No Name and FF Battle, Goku appears in his classic Super Saiyan form, with blue eyes and spiky golden hair. He wears an orange and blue gi outfit with King Kai's symbol emblazoned on its front (due to the simplified art style, it is unclear if this is meant to be Goku's classic appearance or a slightly modified outfit for the purposes of the animations).

After his death in FF Battle, Goku returns in the form of a zombified Super Saiyan 3. His golden hair has become much longer, reaching all the way down his back. His undead state has given him gray skin, blank white eyes, and a mouthful of sharp fangs. He wears a red shirt with a nuclear symbol on it, a matching red scarf with tattered ends, a blue jacket bearing the Capsule Corporation's logo on the sleeves, black jeans, and red shoes. He has two paper talismans nailed to his body (one on his forehead, and the other on the end of his scarf), and yellow lightning periodically crackles around his body.

In Epic Battle Fantasy, Zombie Goku is largely similar to his Brawl Royale appearance. However, he is significantly worse for the wear after his previous defeat; his entire chest has been torn open, exposing his ribs and leaving parts of his intestines hanging out, part of his spinal column is visibly protruding from his back, a bone is sticking out of his right arm, and the left side of his face is missing most of its skin, leaving bloody red flesh exposed (oddly, this includes part of his hair). His outfit is largely unchanged, save for a few more pentagram talismans dotted around his body and dirty white bandages wrapped around both of his forearms. He now wields Anarchy, a jagged black sword with a red pentagram etched onto its blocky handguard, and is accompanied by a Duskull, which appears to control him with ethereal golden threads connecting its hands to parts of his body.

In this animation, Goku appears after Black Waltz kills Freeze, literally flying circles around the remaining combatants (Black Waltz and Matt). He then obliterated his opponents with a mighty Kamehameha, supposedly destroying the Earth. It is unclear how future games and animations are meant to occur given the ending of this animation; either the Earth was restored somehow, other games take place on other planets, or this animation is simply not canon (Which is highly likely.)

Goku again appears as the final enemy in FF Battle, appearing to challenge Matt and Kat after they overcome Black Waltz and Freeze once more. He kills Kat and steals Matt's sword, prompting the latter to summon the Zanmato sword to battle Goku. After a furious exchange of blows, Goku knocks Matt unconscious, only to be bisected himself by the aftermath of Matt's attack.

This game sees Goku's first appearance as a zombie and a final boss. He attempts to kill Matt with a powerful energy attack, but Matt outdraws him and cuts him in half vertically, releasing a burst of power that seemingly destroys the planet (again).

Goku appears as the main antagonist and final boss once again. After recovering (in a fashion) from his latest defeat, Goku took up residence in a haunted graveyard, waiting for Matt and Natalie to arrive so he could kill Matt for beating him twice before.

After a fierce battle, Matt and Natalie finally overcome the zombified Goku, seemingly destroying him for good. However, Goku's explosive death throes release massive amounts of gamma radiation, ravaging the planet and setting the stage for Epic Battle Fantasy 2.

Goku is often shown as one of the strongest beings in the whole series, being the only one to beat Matt without hacks. In terms of power, he is second to only Godcat and probably Akron (considering that it took 3 heroes to stop Akron, but only 2 to destroy Zombie Goku). He is very skilled with a sword, and retains some of his ki attacks from the Dragon Ball series, such as his Kamehameha and Spirit Bomb techniques. Strangely, he does not display the ability to fly after becoming a zombie, implying that he may have lost the ability after his zombification.

Goku's primary weakness is Holy, so have Matt wield Heaven's Gate and cast Seiken while Natalie uses Judgement. However, your primary goal should be keeping your buffs up, in order to reduce the damage Goku inflicts. He'll make things difficult by periodically debuffing you with his sword attacks and using Syphon to prevent you from using skills, but Antidotes and Ethers/Max Ethers on hand will help counter these tactics.

As his health drops, Goku will begin using his energy attacks in addition to melee strikes and status-inflicting spells. Keeping up your defences and HP becomes even more important, but try to cure any lingering Poison effects; not only will the HP drain prove more troublesome with Goku's increased damage output, but the boss will become less and less prone to using his ailment-inducing magic as the battle goes on, so the chances of being re-poisoned become lower.

At low health, Goku will start using his deadly Spirit Bomb attack. Although it takes a turn to charge up, it effectively gives Goku a double turn in the next round - you'll have a Spirit Bomb dropped on your heads and whatever attack Goku decides to use on his own turn. The best defence against this combo is to Defend after Goku launches the Spirit Bomb - if your HP is high and your defensive buffs are up, you'll usually survive the subsequent assault long enough to recover. Alternately, if Goku's own HP is bottoming out, you can forgo caution and go all-out on him, depleting the rest of his health before his most devastating attack can land.

Retrieved from "https://epicbattlefantasy.fandom.com/wiki/Goku?oldid=39963"
Community content is available under CC-BY-SA unless otherwise noted.