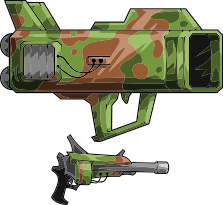 The Green Goliath is a non-elemental gun available for Lance in Epic Battle Fantasy 5. It is currently exclusive to the paid Steam release of the game and the outdated free Battle Demo.

The Green Goliath is a huge bazooka seemingly based off of the M202 FLASH multi-rocket launcher. It has an atypically boxy frame with fins along the top and vents on the sides to dissipate the fiery discharge of its shots. The tips of some rounded grey structures can be seen at the back of the gun; going by its resemblance to the M202 FLASH, these may be the backs of individual rocket tubes. Most of the gun is painted in a green-and-brown camouflage pattern, with two thin black wires protruding from the side and connected to the vent.

The Green Goliath gives Lance's revolver a green frame with brown details at the front, a brown stripe along the back of the cylinder, and two small wires connecting the cylinder and the bottom of the frame.

The Green Goliath has the highest offensive boosts of any gun in the game, outright doubling both Attack and Magic Attack when fully forged. However, it also lowers Accuracy and Evade; the drop isn't too significant, but it is further worsened by the gun's high chance to make Lance Tired between turns. On the other hand, it boosts Bio skills (despite being a non-elemental weapon), and its weapon-elemental skills can unleash Bamboo Trap and inflict Tired; the latter helps mitigate its stat penalties while further enhancing Bio damage.

While the Green Goliath is generally Lance's best choice for a hybrid offensive build, it suffers from a lack of defensive stats and a fairly inconsequential elemental boost; Lance's only Bio options are the extremely weak Poison Gas, the shared skill Acid Blast, and the gun's own unleash. Overall, it's outclassed by the likes of the Heavy Claw or the Flame Titan, which have marginally less raw power in exchange for lesser penalties and more synergistic elemental boosts for pure physical or magical offense, respectively.

The Green Goliath has resistances to Wind, Tired, Weaken, Syphon and Disable. All but the first become an immunity at Level 5, but its Tired resistance will not block its auto-status.

Despite its huge, intimidating appearance, the Alt Green Goliath has fairly mediocre Attack and Magic Attack; on the other hand, its HP bonus is tied with the Alt Crystal Wing for the second-best among Equip Remix's guns (only beaten by the Alt Coconut Shooter). It powers up Bio skills (which Lance can't really exploit without shared skills) and has a chance to counter attacks with Armor Crush, but its best asset is the guaranteed Charge it gives Lance between turns, enabling him to spam Hyper Beam every turn after the first.

While the Alt Green Goliath's Hyper Beam isn't particularly strong, its high status infliction chance and multi-target nature makes it fantastic for applying status effects. It inflicts Tired on its own, but the right Flairs combined with status-boosting gear allows it to reliably hit an entire wave of foes with the ailment of the player's choice; additionally, its counter provides single-target Dispel support if Lance is attacked. Although Anna's status builds are typically more versatile (since she can apply multiple status effects with her inherent abilities in addition to her weapon-elemental skills), the Alt Green Goliath remains an effective option for maintaining a particular status effect on all foes at once.

The Green Goliath is found inside a chest in the Mineshaft Maze, guarded by the Neon Valhalla.