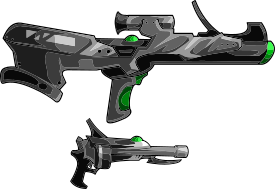 Gungnir is a non-elemental gun available to Lance in Epic Battle Fantasy 5. It is currently exclusive to the paid Steam release of the game and the outdated free Battle Demo.

Gungnir is a mainly black and grey gun resembling some sort of sniper rifle; along with the Super Snipe ZX and the Hellfire Shotgun, it is one of the only guns that has a scope. It has green elements around the grip and muzzle, as well as a small green orb just behind its scope.

Equipping Gungnir colors Lance's revolver mostly black, with white-grey accents at the tips of the frame and along the cylinder, a small green orb on the upper part of the frame, and a black bayonet underneath the silver barrel.

Gungnir is most notable for its balanced combination of stats; it has good Attack and Magic Attack, great Accuracy and Evade, and slight increases to Lance's defensive stats. Its weapon-elemental skills have a sky-high Stagger chance, which can be useful if M.O.A.B. is on cooldown; even accounting for Hyper Beam's Charge turn, Lance can still Stagger entire waves of foes every other turn unless they're extremely resistant to the status.

Unfortunately, Gungnir has absolutely no unique Equipment Effects aside from its on-hit status effect, which greatly limits its usefulness despite its great stats and handy status resistances. Guns like the Spine Snapper or the Accelerator will prove far better for a support build, while the likes of the Heavy Claw or the Flame Titan offer superior offensive potential due to their ability to benefit from elemental boosts and neutral status effects.

Gungnir resists Doom, Instant Death, Disable, Syphon and Dispel, all of which become an immunity at Level 5.

Alt Gungnir has incredible offensive power; its Attack is the third-best of any gun in Equip Remix, while its Magic Attack is the second-best. It's also tied with the Alt Hellfire Shotgun for the second-best Accuracy among Alt guns, giving Lance's attacks a much better chance to hit their marks...which is where the good news ends, because it has absolutely nothing else aside from a resistance to three status effects.

Despite its excellent offensive stats, Alt Gungnir's damage output pales in comparison to the likes of the Alt Chainsaw Gun, the Alt Heartstopper, and the Alt Flame Titan. All of these guns have significant drawbacks, but they will consistently outclass Alt Gungnir once the player learns to compensate for their weaknesses and focus Lance wholly on physical or magical offense. In terms of the former, the Alt Super Snipe ZX is effectively a direct upgrade; in exchange for Alt Gungnir's Magic Attack, it has significantly better Attack and Accuracy on top of decently useful special effects and arguably superior status resistances.

Alt Gungnir resists Dispel, Stagger and Confuse. All of these become an immunity at Level 5.

Gungnir is found inside a chest in the Mineshaft Maze, in one of the puzzle rooms. The chest appears after solving the walk-once puzzle.