This article is about the bow available in EBF5. For the recurring sword, see Heaven's Gate. 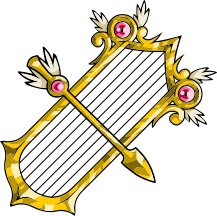 Heaven's Voice is a Holy-elemental bow available for Anna in Epic Battle Fantasy 5.

Like Earth's Whisper, Heaven's Voice makes strumming noises whenever Anna fires an arrow from it.

Heaven's Voice provides a moderate boost to Attack and Magic Defence, along with a poor boost to Magic Attack. It empowers Holy skills and can unleash Judgement with Weapon-elemental skills; the trigger chance is somewhat low, but Anna's Normal Attack guarantees its activation. Despite benefiting from the elemental boost, the Judgement unleash is only about half as powerful as Natalie's version due to the bow's low Magic Attack. However, the fact it can be essentially spammed every single turn still makes it a very powerful tool against enemies weak to Holy; it also heals a sizable amount of Anna's HP, which helps her durability.

In addition to unleashing Judgement, Heaven's Voice has a good chance to Syphon the victims of its weapon-elemental skills, and its Piercing Shot counter enables it to apply its on-hit effects to foes that hit Anna on their turn. If Syphoning is not required, Anna can equip a Flair to let her counters apply whichever status the player finds most beneficial; in particular, the Crossbone Pin can inflict Curse to further boost the damage of the bow's unleash.

Heaven's Voice grants resistances to Heavy, Light, Syphon, Disable, and Holy, becoming immune to all of them at Level 5.

With Equip Remix, Alt Heaven's Voice brings music and strong magic to the battlefield while silencing foes it strikes. It has moderate HP, subpar Attack, and an impressive Magic Attack stat; while theoretically useful for a magic-oriented Anna build, Lance and Natalie will generally outperform her even without the Alt Flame Titan or the Alt Wrath of Zeus. It can also cast Phyrnna's Blessing between turns, which gives the party Regen and a weak Magic Attack buff, but it's fairly unreliable.

Where Alt Heaven's Voice really shines is its ability to Syphon foes with its weapon-elemental attacks; not only do they have an inherently high chance to inflict the status, they also have a decent chance to unleash Mute for another shot of Syphon. This gives Anna the ability to lock down a single foe's skills with a Normal Attack or turn Arrow Rain into a damaging 1 CD Syphon, especially with status-boosting headgear and armor. It's a subpar day-to-day weapon due to Syphon's effectiveness being very foe-dependent, but it's extremely useful against the relevant enemies (such as Ores, Bombs, and Sprites).

Alt Heaven's Voice resists Heavy, Light, Syphon, Disable, Death and Doom, becoming immune to all of them at Level 5.

Heaven's Voice is found in the Warp Zone as part of the reward for completing Bunny's quest. Bunny only appears during the Easter season.