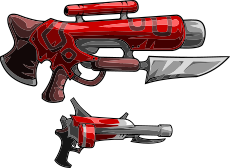 The Hellfire Shotgun is a Fire-elemental gun available for Lance in Epic Battle Fantasy 5.

The Hellfire Shotgun is a single-barreled shotgun with a predominantly red body decorated with dark geometrical shapes of unknown significance. It has darker red/brown sections on the underside, grip, and stock, as well as a short silver bayonet mounted below the barrel. Strangely, a red scope is mounted atop the gun, despite shotguns being used at short to medium range; however, this may justify its sizable Accuracy boost.

The Hellfire Shotgun adds a red frame to Lance's revolver, with some white details towards the front and along the cylinder.

The Hellfire Shotgun provides good offenses (slightly favoring Attack) and a boost to Lance's Fire skills, along with the second-best Accuracy and Evade among guns (only behind the Super Snipe ZX and the Spine Snapper, respectively). It counters attacks with Snipe, which inflicts Dry and may trigger its Flame Burst unleash like the rest of Lance's Weapon-elemental skills.

Although it lacks the bulk and versatile utility of the Desert Scorpion and the literal magical firepower of the Flame Titan, the Hellfire Shotgun is a useful middle ground between the two guns in an offensive support build. Its counter gives it the ability to passively apply Dry and the occasional Defence debuff (from its unleash) to set up allied Fire and Bomb attacks (particularly from Matt and Anna), and its offenses are strong enough to let Lance put decent pressure on foes if needed; it's also helpful against overlevelled enemies, thanks to its great Accuracy and Evade.

The Hellfire Shotgun provides resistance to Fire, Bio, and Dark. None of these become an immunity at Level 5.

If you need a weapon that leaves foes literally seeing red, look no further than the Alt Hellfire Shotgun. It has great Attack (the fourth-best of any Equip Remix gun), mediocre Magic Attack, and an Evade stat only outmatched by the Alt Spine Snapper. It empowers Fire skills and allows Lance to steal from foes with his Normal Attack and Armor Crush (which is helpful for farming), but its main strength is its powerful Unload counter, allowing Lance to passively deal high physical damage if he is attacked. Additionally, it's notable for inflicting Berserk with weapon-elemental skills, both directly and via its Hellfire unleash.

While intended as a penalty, the Alt Hellfire Shotgun's on-hit status can be advantageous against certain foes by making them more predictable or locking them out of their most annoying skills. If its Berserk infliction is undesirable, Lance's allies should be ready to remove the status with Ice/Water attacks, Wet, Chill, or Dispel; alternatively, inflicting Dry on Lance's targets can reduce the chances of them surviving long enough to benefit from Berserk status. Lance can even do this himself by equipping the Alt Amethyst Earrings, although Hellfire will still inflict Berserk.

The Hellfire Shotgun is found inside a chest beside the Equipment Shop in Greenwood Village, behind Randy's house. The chest is surrounded by rubble that can be cleared by completing Randy's quest.