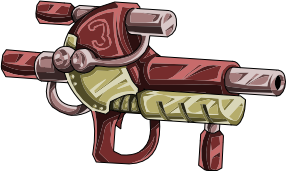 The Mini Bomber is a Bomb-elemental gun available for Lance in Epic Battle Fantasy 4.

The Mini Bomber is a rather strange-looking gun with a front end vaguely reminiscent of the M60 machine gun. It is mostly reddish-brown with tan and pale copper accents. It has three cylindrical protrusions; one beneath its muzzle acting as a grip, another on its stock that may possibly be a shoulder rest, and a third one on the top of the stock, attached to a copper cylinder that goes right through the crescent-shaped protrusion on top of the gun. This cylinder has a curved, metallic wire-like structure that connects to a pair of small discs on the side of the stock. A vague numeral "3" can be seen on the upper half of the stock.

The Mini Bomber has moderate offenses, a little MP, and great Accuracy. It powers up Bomb attacks and provides some of its own; it can cast Mini Missiles between turns and unleash Blast with Lance's weapon-elemental skills. Both of its bonus skills and its own weapon-elemental attacks have varying Stagger chances, giving Lance a good chance to inflict the status semi-consistently.

Although it can't quite match the power of the Vortex Cannon, even with its Bomb-boosted attacks, the Mini Bomber has better synergy with Lance's natural skills; its resistances are also quite useful when it is first obtained. It's usually preferable over the Heavy Claw due to its better Magic Attack and bonus skills to further improve Lance's Bomb damage, which serves as his main niche in the party. However, the Red Vulcan, the Thunder Core, and especially the Shadow Blaster provide similar offensive synergy with Lance's skill set with higher Magic Attack, giving them better damage output against foes not weak to Bomb.

The Mini Bomber resists Bomb and Stagger, becoming immune to the latter at Level 5.

The Mini Bomber is found in the Waste Disposal Plant, in the bottom-right chest of the Slime Cat screen; the chest is guarded by a battle that appears as a Drill Golem.