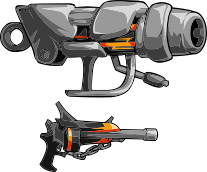 The Nitro Bomber XL is a Bomb-elemental gun available to Lance in Epic Battle Fantasy 5.

The Nitro Bomber XL is a very large-caliber weapon with a hand lever instead of a conventional trigger, implying that it takes a lot of strength to fire. It has a dark grey body with silver plating and orange wiring, as well as a dark grey section on the back with a large metal ring. The latter is implied to be used for loading its ammunition; coupled with the size of its barrel, it appears to be a breech-loaded cannon or rocket launcher.

The Nitro Bomber XL gives Lance's revolver a black frame with orange details and a small chain along the underside of the barrel.

The Nitro Bomber XL is a simple offensive gun with sizable Magic Attack, along with modest boosts to Attack and both defenses. It can cast Air Strike between turns, unleashes Nitro Burn with physical attacks, and has a chance to counterattack with Energy Bomb - all of these skills benefit from its elemental boost. It also has a moderate chance to inflict Stagger with weapon-elemental skills, although the status can be used up by the Nitro Burn unleash.

Unfortunately, the Nitro Bomber XL is not a particularly effective weapon compared to more general-purpose guns like the Flame Titan. While its Bomb damage can be quite impressive, Lance's natural Bomb magic suffers from lengthy cooldowns, and its Nitro Burn unleash runs off of its weaker offensive stat. That being said, it does have high damage output for Hand Bomb builds, and Energy can give Lance a reliable magic Bomb attack (although it won't be available until Redpine Town).

In comparison to the other Bomb-elemental guns in EBF5, the Nitro Bomber XL's main niche is its superior magical damage output. The Desert Scorpion is more notable for its defensive bulk, its Earth unleash, and its ability to automatically Dry foes; on the other hand, the Heavy Claw is more suited for an offensive physical build and acts as Lance's best source of consistent Bomb damage.

The Nitro Bomber XL resists Fire, Thunder and Bomb. None of these become an immunity at Level 5.

While the Alt Nitro Bomber XL can't put out as much ordnance as its normal version, it compensates with much bigger bombs. It has subpar Attack and a decent Magic Attack stat; it also sharply increases both Accuracy and Evade. It can unleash Big Bomb as a bonus skill, and may cast M.O.A.B. between turns; while powerful (especially with the gun's Bomb boost), neither of these have a particularly high chance of triggering.

Overall, while the Alt Nitro Bomber XL has plenty of explosives, it lacks power in comparison to other guns like Alt Heartstopper or the Alt Flame Titan.

The Alt Nitro Bomber XL resists Bomb, Stun, Stagger, and Confuse, becoming immune to all of them at Level 5.

The Nitro Bomber XL is found inside a chest in No Man's Land, nestled between two spiked balls on the upper-left corner of the graveyard next to the Mineshaft Maze entrance. This chest can only be reached after Lance joins the party; The Hammer is required to break the stones blocking access to the area, and the stones will be blocked by a barricade on the previous screen until the Neon Valkyrie is defeated.