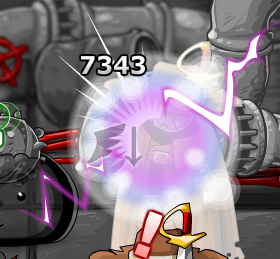 "Protip: You can make plasma by microwaving fire! But don't try that at home."
―Lance, Epic Battle Fantasy 4

Plasma Shot (also known simply as Plasma) is a basic Thunder-elemental skill available for Lance in Epic Battle Fantasy 3, 4 and 5.

When cast, Lance shoots two bullets that will create purple electrical discharge upon contact with the enemy. Unlike most other Thunder-elemental skills, it can't Stun, but can debuff Evade.

Plasma Shot is quickly replaced by Lance's more advanced Thunder skills: Plasma Wave and Plasma Field, but since it is the only one of the three that targets a single foe, it may still be useful when enemy wave is composed of foes with varied Thunder resistance.

Plasma's evade debuffing effect may only occur after upgrading the skill to the third level.

Plasma Shot may now inflict its special effect on all levels. Lance will already have the skill on a second level when he joins the party in Crystal Caverns.

Lance comes with the skill already learned at level 2.