The Pyrohydra's full body is never seen, but its overworld sprite gives it a fairly standard reptilian body with dark red scales and a pale red underside. The end of its tail can barely be seen poking out from the chasm it rests in, tipped with a large bone spike. While the sprite shows its three heads resting directly on its shoulders, the actual battle gives each of them a long neck that leaves their main body unseen.

Abyss appears to be the Pyrohydra's rightmost head in the battle. It has two pairs of red eyes, three small black horns on its nose, a pair of long black horns on its head, and several black spikes dotting its neck and lower jaw (including an especially large one on its chin). It has large, fin-like ears on the sides of its head and smaller fins running down the back of its neck.

Blaze is the Pyrohydra's central head in the battle. It has a long horn on its nose and a smaller one above its orange eyes, at least six horns on its head, and numerous spikes on its neck and lower jaw. Unlike Abyss, Blaze's spikes are all the same shade of light red as its teeth and underbelly, and none of them point forward. It is also the only Pyrohydra head to lack "jowls" of any sort, showing that its teeth run all the way to the back of its skull.

Czars appears as the Pyrohydra's leftmost head in the battle. It has white eyes, a very small horn on its nose, and two blunt horns on the back of its head. It has a mane of off-white hair running down its neck, with other tufts on its head and jaw (including one patch on its chin resembling a goatee).

The Pyrohydra might be a single entity in the lore, but it's effectively three bosses in one when you fight it. Each head is a capable opponent with high stats and powerful abilities to pose an enormous threat to the party, and they only become stronger as their numbers decline. In addition to their own unique buffs, each head gains a hidden boost to its base offenses when another head dies; when a head is left alone, it also gains a base Evade increase and the ability to summon normal foes as reinforcements.

While they share some common traits - Fire absorption, an immunity to Stun and Death, a near-immunity to Syphon, slightly above-average Evade, a -20% debuff cap, and identical non-elemental physical attacks - the Pyrohydra's heads are otherwise unique in their tactics, abilities, weaknesses, and resistances.

As its name suggests, Abyss uses Dark attacks, but it also has some Poison skills for variety. It specializes in harmful Status Effects, either applying Poison to slowly chip down the party's HP or inflicting Doom and Death to kill them immediately. Either way, it forces the party to waste time either curing the statuses or reviving and re-buffing themselves, shifting momentum in the Pyrohydra's favor.

Abyss is extremely vulnerable to Thunder and especially Holy, but it absorbs Poison, Fire, and especially Dark. On Epic difficulty, it also enters battle with three stacks of Poison, which its resistance turns into a makeshift Regen effect; since the party has no means of removing the status, it can become a fair bit harder to wear down. Its HP is also slightly higher than the Pyrohydra's other heads.

When Blaze or Czars dies, Abyss automatically buffs its Magic Attack and Magic Defence by 70%.

Apart from its non-elemental physical attacks, Blaze lives up to its name by using nothing but pure Fire-elemental attacks. Most of these attacks are magic-based and capable of debuffing the party's stats, but Hellfire deals physical damage and has a decent chance of inflicting Berserk. Additionally, Blaze can slightly support itself and its allies by raining Hot Ash over the battlefield, inflicting light Fire damage to ally and enemy alike - since the Pyrohydra absorbs Fire, this translates to a weak heal for them while the players suffer damage and possible Magic Defence drops.

Aside from the Pyrohydra's standard status resistances and Fire absorption, Blaze is immune to Bomb and highly resistant to Poison. On the other hand, it is weak to Wind, Ice, and Water (in ascending order of severity).

When Abyss or Czars dies, Blaze automatically buffs its Attack and Defence by 70%.

Of the Pyrohydra's heads, Czars has the most varied elemental options. It can hit the entire party at once with Fire, Ice, Thunder, or Holy magic, each with its own debuff or status effect. However, Czars's most notable trait is its effective support magic, which allows it to simultaneously heal and buff its allies. It can either heal them on the spot while raising their physical stats, or apply Regen while buffing their magic stats.

Czars is primarily weak to Dark, but it also takes severe damage from Earth attacks. On the other hand, it absorbs Fire and especially Holy while being immune to Stun and Death. It also has a near-immunity to both Syphon and Berserk.

When Abyss or Blaze dies, Czars automatically buffs its Evade and Accuracy by 70%.

The 2016 update applied several changes to the Pyrohydra in order to make it slightly easier. Each head's HP was decreased by 5 to 18%, making them less durable, and their Fire resistance was reduced from 200% to 150%, making Blaze's Hot Ash less effective at healing them. Additionally, Abyss's elemental Poison resistance was changed from 200% to 130%; combined with the global nerf to Poison status (≈30% less damage on foes), this made Abyss's regeneration over four times weaker.

On Epic difficulty, enters the battle with 3x

Abyss cannot be debuffed further than to -20% of a stat.

Blaze cannot be debuffed further than to -20% of a stat.

Czars cannot be debuffed further than to -20% of a stat.

This section is incomplete. You can help Epic Battle Fantasy Wiki by adding required information to it.
To do: Rewrite everything from scratch.

The Pyrohydra has a lot of elements to consider (both offensively and defensively), but most of its attacks are Dark, Fire, and Holy-based, with some Poison, Ice, Thunder, and non-elemental moves thrown in for variety. Its main weaknesses include Holy, Water, and Dark, with Thunder, Ice, and Earth being fairly effective as well.

Other options include the Ninja Cloak, the Soul Eater, and the Rune Blade.

Another option is the Ninja Skirt.

Other options include the Red Jacket, the Chainsaw, and the Shadow Blaster.

Start the battle by targeting Czars - not only will its healing abilities make defeating any of the heads substantially more difficult, but it has the widest variety of elemental spells to hit you with. Use any non-Holy Limit Breaks at your disposal (Black Hole works well here), which will probably take care of the Fire Bits that appear at the beginning of the battle; ignore the other heads except with multi-target attacks. After the initial assault, Czars will most likely cast its Regen spell while the other heads start attacking; counter this with Dispel.

Once you've used your Limit Breaks, revert to standard battle tactics - prioritize keeping your HP and defenses strong to survive the Pyrohydra's triple assault. In between healing and buffing yourself, hit Czars with Fright, Pulse, and Darkblast, and stack as much Poison as you can - it will counteract Czars's healing attempts and it has no way to remove it. Another tactic that works is stocking up on Dark Runes, equipping Natalie with the Death Bringer, and have her use Doomsday on every available turn; this heavily damages Czars and does a good deal of damage to Blaze as well, but it won't even scratch Abyss.

Once Czars is dead, focus your attacks on one of the remaining heads. On one hand, Blaze has a weak healing attack that hurts your party and heals the Pyrohydra at the same time, one of its attacks can lower your Accuracy, it's easier to build resistance to Dark attacks than Fire, and it's a little less durable than Abyss (especially on Epic difficulty). On the other hand, Abyss uses a lot of attacks with no Dark property as well, and it can inflict a variety of dangerous status ailments (Poison, Doom, and Death). Don't try to Poison either of the two remaining foes; Blaze is nearly immune, and Abyss absorbs it (which means that you'd essentially give it a permanent Regen). Use Seiken, Judgement, Plasma, Thunderbolt, and Genesis (if the battle lasts that long) on Abyss, and hit Blaze with Iceberg, Iceshard, Shockwave, and Power Metal (if your party needs healing).﻿

Keep in mind that every defeated head buffs the remaining heads, and that the final head will start summoning backup every four turns. Once you've brought down two of the three heads, it may be wise to spend a few turns buffing and healing until the final head's power has decreased to a more survivable level; remember, however, that some of the buffs are to its base stats, and thus cannot be degraded easily (especially since the Pyrohydra's stats can't be debuffed by more than 20%).

Veteran players often try to balance attacks between Abyss and Blaze, allowing them to kill both at once. This strategy sometimes requires more time and resources, but it makes the battle more manageable by avoiding the summons and stat boosts that the Pyrohydra gains when it's down to its final head. 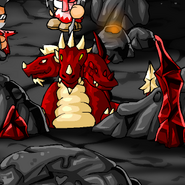 The first scene of the party's battle with the Pyrohydra; note Abyss and Blaze's different positions.

The second scene of the party's battle with the Pyrohydra.

The third scene of the party's battle with the Pyrohydra; Czars has disappeared while Abyss and Blaze have switched positions..

The final scene of the party's battle with the Pyrohydra; Abyss and Blaze have switched positions yet again.
Community content is available under CC-BY-SA unless otherwise noted.
Advertisement