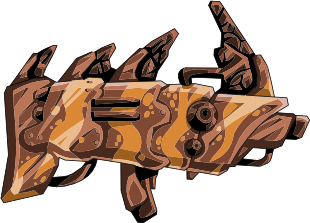 The Quake Maker is an Earth-elemental gun available for Lance in Epic Battle Fantasy 4.

The Quake Maker has a very unorthodox shape, being made of five segmented parts. The gun is painted brown with some irregular orange stripes, which seems to be sort of camouflage pattern. On the top of the weapon there are four curved spikes which appear to be strictly aesthetic in purpose.

The Quake Maker is a strong, balanced weapon with sizable offensive boosts mixed in with solid defensive boosts. Despite its good offensive stats, the Quake Maker appears to be meant for a tankier role - it comes with a great boost to HP plus solid defensive stats, can debuff enemies' Attack and, as icing on the cake, may cast Sand Dune with single-target skills, dealing above-average damage and debuffing the target's Accuracy. Despite boosting Earth attacks, Lance only has two such skills to learn: Sand Dune and Giga Drill, both coming from the shared skills pool and both physical.

The Quake Maker gives Lance resistance to Earth, Wind and Tired; the latter becomes an immunity upon reaching level 5.

Found on the Graybone Cemetery, in one of the two chests at the bottom, blocked by a Copper Block.

Retrieved from "https://epicbattlefantasy.fandom.com/wiki/Quake_Maker?oldid=50731"
Community content is available under CC-BY-SA unless otherwise noted.