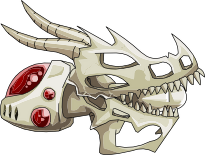 The Rapturer is a non-elemental gun available for Lance in Epic Battle Fantasy 3.

The Rapturer is a relatively small gun, with a predominantly white frame that incorporates the severed head of a Zombie Hydra. The actual gun mechanism is located behind the skull, where the user rests his shoulder, and the barrel protrudes between its jaws. The stock of the gun is adorned with several shiny red domes, as well as small vents.

The Rapturer has mediocre Attack and average Magic Attack, but its main niche is reducing the damage output of enemies. Its weapon-elemental skills can reduce the victim's Magic Attack, while its Unleash does the same for their Attack; when these traits are combined, it can greatly weaken enemy blows from both sides of the offensive spectrum.

The Rapturer is found in Rock Lake, in a lone chest amid the maze of rocks and piers. The chest can only be accessed by taking the middle path in the cave to the east.