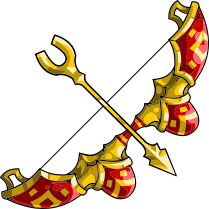 The Regal Turtle is a Holy-elemental bow available for Anna in Epic Battle Fantasy 5.

The Regal Turtle is an ornate golden bow lined with red shields fashioned after turtle shells. Its arrows are pure gold (or gold-plated), with barbed heads and horseshoe-shaped tails.

The Regal Turtle is a purely defensive bow with huge HP and Defence bonuses; it can also give Anna the Defend status between turns, making her even more durable. However, this comes at the cost of halving her Magic Attack and having a pitiful Attack stat, effectively wasting its boost to Holy skills. It also boosts healing skills, but this only manages to neutralize the Magic Attack penalty; any weapon that actually has a Magic Attack bonus will provide more healing than it.

Overall, the Regal Turtle is a very solid defensive choice for Anna when you need her to survive in the front line above all else. However, other defense/support-oriented bows (e.g. Gaia's Gift or the Alchemist's Bow) may provide more suitable special effects if you require Anna to accomplish something specific besides tanking damage.

The Regal Turtle resists Fire, Bomb and Holy, none of which become an immunity at Level 5.

Despite changing its elemental affinity from Holy to Thunder, the Alt Regal Turtle lives up to its noble name by being an incredibly useful tool that is essential for status-based builds. It has pitiful offenses (which largely wastes its boost to Thunder skills), but its impressive set of defensive stats gives Anna significant bulk to settle into a support role. To this end, it also improves debuffs and enhances the chance of inflicting status effects; the latter in particular is a fantastic asset for Anna.

In comparison to the Alt Thor's Hammer, the Alt Regal Turtle has no summons and lower offenses in exchange for substantially higher bulk; this generally makes it better for a pure status build. It also has a debuff boost while the Alt Thor's Hammer improves buffs; neither is Anna's forte, but they may be relevant depending on party composition.

The Alt Regal Turtle resists Thunder, Holy, Curse and Bad Luck, with the latter two becoming an immunity at Level 5.

The Regal Turtle is found inside a chest that drops after defeating PHOENIX in a secret room inside a cave in the Wild Tropics. Prior to the v2 update, it was found in the Crystal Caverns, on the screen with the cross-shaped block puzzle; the chest was at the end of a hidden passage.