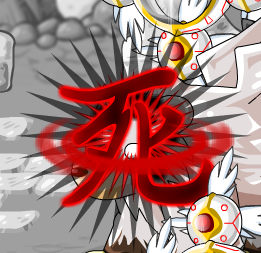 When cast, Sacrifice creates a glowing red 死 (Shi - Death) kanji over the target, wreathed in red vapor and emblazoned over a red and black "burst" detail.

Sacrifice kills the user to deal massive, somewhat Dark-elemental magic damage to a single enemy, with a chance of inflicting Instant Death to the target. The act of sacrifice cannot be blocked by Instant Death resistance, Bless or Morale, but will still trigger Auto-Revive. It also has no impact on the Limit Break bar.

In general, Sacrifice has little to no practical applications, as the loss of a party member outweighs the damage dealt. While Auto-Revive mitigates its main drawback, the time spent setting it up for a single move is usually better spent on other tactics. Additionally, Sacrifice only hits one enemy and has low elemental degree, meaning effects that boost Dark will not do much.

Sacrifice can be used in joke builds such as those revolving around Revenge or to kill off a player to conserve experience, but Lance (who has the least useful skillset of the four and is most often benched) cannot learn it. It has no practical use in normal play.

In EBF5, Sacrifice is no longer usable by players, and now simply deals weak Dark-elemental damage while debuffing the HP of the target, and has a decent chance to inflict Doom. It also has no negative consequences on the user.

Sacrifice has no side effects when used by foes.

Found in the Graybone Cemetery, in the bottom-left corner of the map, in the chest inside the block puzzle.

No longer usable by players, Sacrifice is only used by the Zombie Hydra; it's also vastly different from its EBF4 version.