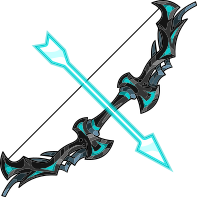 The Sharanga is a non-elemental bow available for Anna in Epic Battle Fantasy 5.

The Sharanga is a high-tech bow made out of a mysterious black material with slightly luminescent blue-green markings and thin strips of dark blue metal lacing through its limbs. Its arrows are made entirely of energy colored the same shade of blue-green as its markings.

The Sharanga gives a good buff to Attack and Magic Attack, as well as providing weaker buffs to HP, Accuracy and Evade, but provides no defensive stat buffs. Its only special effect is its Geometry unleash; while strong, it is quite unreliable.

Despite its good offenses, the Sharanga compares poorly to The Stinger, the Iron Tusk, and the Earth's Whisper (when used for the unleash), which have even stronger (if less balanced) offenses, superior resistances, and more useful special effects. Even for non-elemental offense, the Fenrir's Jaw does a much nicer job of things.

The Sharanga resists Dry, Wet, Heavy, Light and Dispel, becoming immune to all of them at Level 5.

The cosmic Alt Sharanga looks upon Equip Remix and grants solid power while countering with a flurry of blows. It's a Dark-based weapon with substantial Attack and average Magic Attack, as well as providing weaker buffs to Accuracy and Evade. It can counter attacks with Combo Shot, giving it an extra offensive edge and allowing it to passively apply statuses with the appropriate Flairs; on the other hand, its elemental boost is somewhat wasted on Anna, who has very limited Dark options even with shared skills accounted for.

The Alt Sharanga resists Dark and Holy. Neither of these becomes an immunity at Level 5.

Found inside a chest in the Frozen Valley, one screen east of the Slime Cat, the chest is hidden below the alien monument.