Shops are a recurring gameplay element of the Epic Battle Fantasy series. Their exact nature and complexity varies, but their basic function is to enable players to buy and sell items for gold.

In the original game, the shop is a single screen with various items displayed. Players could buy and sell items by clicking the arrows beside each item - clicking the "up" arrow bought copies of the selected item, while clicking the "down" arrow sold copies of the item. Once players are happy with their items, they can proceed to the next series of battles.

Two shops are available in Epic Battle Fantasy, both have the same item selection and prices. The first one appears at the very beginning of the game, run by a green-haired woman with a notable similarity to Anna. The second shop appears near the middle of the game (after the battle with the Defender), run by a mysterious purple-haired woman wearing a black dress and a pointed hat. Every shop the player is given some gold to spend (14000 the first time, 7000 the second time), and leftover gold from the first shop can be used in the second shop.

Once again, two shops are available in the game, with identical item selection and prices. This time, they are each preceded by a 100 seconds long minigame that enables the player to earn some gold to spend on items. Like in the first game, there is also a guaranteed sum given to spend in both shops (now only 4500 gold in both shops); unlike the first game, gold not spent in the first shop is lost.

The first shop is available after defeating the Guardian. Red Mage appears (much to Matt's dismay) and offers to sell some of his excess potions. Despite Matt's dislike of the man, he and Natalie agree, purchasing what they need before heading off to the frozen beach. The second shop is run by the Angel who revives the heroes after their ill-advised attempt to eat poisonous monsters.

There are three shops available in EBF3, all found in different parts of The Town. In the northwest corner, there is an equipment shop and an item shop. In the northeast corner is an inn with a food shop inside.

Like EBF3, there are three different types of shops available: an equipment shop, an item shop, and a food shop. Greenwood Village, Whitefall Town, and Goldenbrick Resort all have a version of the shops. Greenwood Village has the basics: a small stock of items and food and relatively cheap equipment. Whitefall Town has a little more: stat-increasing food is introduced along with a bigger selection of food (some of which are only found in a separate shop called Rare Shop), more forging items can be bought, and the equipment is more pricey. Goldenbrick Resort has the best selection out of the three: a full stock of items and food (minus Rare Shop's), as well as expensive equipment.

Like EBF4, there are three different types of shops available: an equipment shop, an item shop, and a food shop. Hope Harbor, Greenwood Village, and Redpine Town all have a version of the shops. Every towns' equipment shops stock the same items, but later material shops contain rarer (more expensive) items. There are also additional shops scattered throughout the world. Steroids are also sold in each town. This is also the first game where you can interact with some shop-keeper NPCs in a non-business situation.

There is only one shop available in Bullet Heaven, and it can be accessed at the beginning of the game. As opposed to the previous games, the shop only sells upgrades that can boost your stats, make collecting items easier, or increase your bomb count.

There is only one shop available in Bullet Heaven 2, and it can be accessed at the beginning of the game. The player can buy cheats, restrictions, new characters and alternate costumes for them.

This section is incomplete. You can help Epic Battle Fantasy Wiki by adding required information to it.
To do: More shop screens. 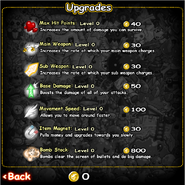 The upgrade shop in Bullet Heaven
Community content is available under CC-BY-SA unless otherwise noted.
Advertisement