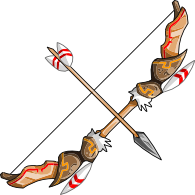 The Sky Feather is a Wind-elemental bow available for Anna in Epic Battle Fantasy 4.

The Sky Feather is primarily made of carved wood, arranged in three layers. The base layer is a simple bow of dark brown wood, with a second layer of light brown wood that covers all but the tips of the first. The ends of the second layer flare out slightly and have thin red lines along their edges. Two pieces of brown wood flank the center of the bow, each decorated with orange lines, white fur, and a white feather with red stripes. The Sky Feather's arrows are light brown, with a metal head and two white feathers with red stripes on the tail.

The Sky Feather is a bow focused on MP conservation and maintaining Anna's ability to use her skills. It provides mediocre offensive stats, but offers a solid boost to Accuracy and Evade while providing a massive boost to MP. Its weapon-elemental skills can unleash Gust, which benefits from its Wind boost, but they're more notable for their decent chance to inflict Syphon. This allows the Sky Feather to shut down specific foes, but the infliction chance isn't strong enough to completely replace the Syphon skill. It also has three useful status resistances, but these can be covered by other equipment.

Ultimately, the Sky Feather has some utility, but is offensively outclassed by the Emerald Cyclone (for Wind specifically) and bows like the Thorn Bow for general offense. In terms of support, it is outclassed by Gaia's Bow, and later on Angel Wing.

The Sky Feather provides resistance to Death, Doom, Syphon and Dispel. It becomes immune to all of them at Level 5.

The player begins the game with the Sky Feather in their inventory.