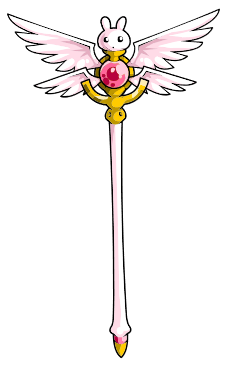 The Slime Staff is a Holy-elemental staff available for Natalie in Epic Battle Fantasy 5. It is a piece of seasonal equipment only available during the Easter Festival.

The Slime Staff is a fairly typical scepter with a highly unusual head. It has a smooth white shaft, with a small pink piece immediately above a golden lower tip, and an incredibly ornate head consisting of a golden section holding a pink orb flanked by four white-feathered wings, two facing upwards and two facing downwards. Atop the golden section is a miniature Slime Bunny made out of the same material as the shaft and wings; white with a faint pink tinge.

Based on its forging requirements, the Slime Staff is at least partially made out of Plastic.

Between a boost to both defenses equal to the Druid Staff and HP tied with the Wrecking Rod, the Slime Staff's overall bulk is second only to the Oak Staff. Unfortunately, this comes at the price of a pitifully low Magic Attack stat, largely wasting its Holy boost and relegating Natalie to a more defensive role; fortunately, it has options to let it stand out in this regard.

Aside from its amazing bulk, the Slime Staff is notable as the only staff that strengthens healing spells without reducing Natalie's Magic Attack; to put it in perspective, its healing spells are equivalent to a staff with 150% Magic Attack. It can also summon a Slime Bunny to grant the party Regen between turns; the trigger chance is not very high, but the applied Regen lasts long enough to be in effect relatively often (even more so with Sharpen support). The Slime Staff will also cause Slimes to either Surrender (small Slimes) or go Berserk (Big Slimes), but this rarely has much effect on how the battle progresses.

In short, the Slime Staff is a remarkably durable weapon that gives Natalie strong defenses without the severe drawbacks of the Oak Staff. Its lack of buff/debuff boosts and on-hit effects hampers its support potential, but it's second to none at keeping Natalie alive and her allies' HP topped up. In between heals, Natalie can use spells like Holy Light and Purging Flame; they won't do much damage despite exploiting the staff's Holy boost, but they can apply Weaken, Dispel, and Magic Attack debuffs to make it even harder for enemies to wear the party down.

The Slime Staff resists Ice, Holy, Syphon, and Disable. It grants immunity to the latter two at Level 5.

In stark contrast to its regular counterpart, the Alt Slime Staff focuses solely on offense, perhaps to a crippling degree. It greatly lowers HP and Evade, but its Magic Attack is utterly tremendous, more than doubling Natalie's spellcasting power at max level. It boosts healing skills and Holy attacks, and its weapon-elemental skills have a fair chance to unleash Purging Flame for extra magical Holy damage and a chance of debuffing the targets' Magic Attack.

The Alt Slime Staff is comparable to the Alt Wrath of Zeus and the Alt Elder's Wisdom as an all-out offensive staff with significant penalties to balance its raw magic power. While it has lower Magic Attack and generally worse stats overall (particularly compared to the Alt Wrath of Zeus), its lack of a debilitating auto-status makes it more reliable in the absence of status-curing support; on the other hand, Natalie will likely require support from Morale, Auto-Revive, or the Alt Pixel Glasses to mitigate her inability to dodge or tank attacks. If its stat penalties are too problematic, the Alt Sol Spear is a weaker but safer alternative; it's also more versatile thanks to its second elemental boost.

The Alt Slime Staff resists Ice, Thunder, and Fire, with none becoming an immunity at Level 5.

The Slime Staff can be bought in any equipment shop for 60,000 gold during the Easter season (March 14 - April 30): Hope Harbor, Greenwood Village or Redpine Town.