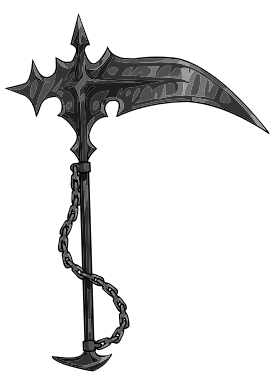 For the similar staff in EBF4, see Death Scythe.

The Soul Crusher is a non-elemental staff available for Natalie in Epic Battle Fantasy 5.

The Soul Crusher is a black metal scythe with a huge, overly ornate head. The top of the shaft ends in a spear-like point, the bottom has a horizontally-curved point, and a series of chain links are tied around the shaft proper.

The Soul Crusher is a bizarre and highly unorthodox weapon that attempts to turn Natalie into a physical fighter/tank. It provides a preposterous boost to Attack - the highest among staves - along with large bonuses to HP, Defence and Magic Defence. While the HP bonus is not the highest, the boosts to Natalie's defences are only surpassed by the similarly impractical Oak Staff. That said, the staff also reduces Evade and Accuracy by significant amounts, and it has no Magic Attack whatsoever. This leaves Natalie without any boosts to her primary offensive stat, a huge bonus to the stat she has literally no skills for, and an impressive set of defensive stats that make her much more durable despite the Evade issues.

Aside from the stats, the Soul Crusher provides no elemental boosts, though it has several interesting abilities that alleviate its issues somewhat. It strengthens buffs and may summon a Steel Wraith, whose Stagger chance and Defence debuff help increase the party's damage output (especially on the physical side). It also increases the chances of foes Surrendering, making weaker foes less of an issue in the first place. Finally, it can inflict Curse with its Weapon-elemental attacks, which can passively debuff enemy defences and give them a makeshift Holy weakness for Natalie's allies to take advantage of.

Ultimately, the Soul Crusher's combination of stats and abilities does next to nothing for Natalie's usual advantages, but allows her to assume an effective supporting role. With that said, staves such as the Kaladanda or the Slime Staff are far more reliable and much less gimmicky choices for a defensive support staff; the Beholding Eye is notable for improving both buffs and debuffs in addition to providing Poison and Virus support. On the other hand, the Soul Crusher competes with The Knife and the Gigavolt for Natalie's best physically offensive staff, although it's generally better to let other characters fill that niche.

The Soul Crusher provides resistance to both Wind and Thunder, becoming immune to neither at Level 5.

Much like its normal counterpart, the Alt Soul Crusher lets Natalie do her best Matt impression by turning her into a physical tank. It lowers her Magic Attack, Evade, and Accuracy, but triples her Attack while giving her substantial HP, Defence and Magic Defence. While this horribly neuters most of Natalie's offensive options, it encourages her to use a defensive build with status support.

The Alt Soul Crusher improves the chance of inflicting status effects in general, which also boosts the Instant Death chance of The Reaper it uses as an unleash; combined with its Normal Attack counter, this allows Natalie to quickly dispatch Death-vulnerable foes if they target her. It also increases enemy Surrender chance, which can be handy against weaker foes. Unfortunately, since Natalie's own status infliction capabilities are a bit subpar, the Alt Soul Crusher has little to offer beyond its Death gimmick, which makes it difficult to justify using it against bosses and other Death-resistant foes.

The Soul Crusher is found inside a chest at the bottom of the Deathly Hollows, accessible after defeating Telperion.