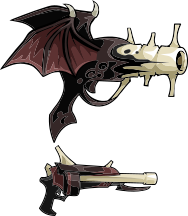 The Spine Snapper is a Dark-elemental gun available for Lance in Epic Battle Fantasy 5.

The Spine Snapper is one of Lance's smaller guns, resembling a strange pistol made out of animal parts. The barrel is made from a massive spine, with the rest of the weapon being made of an ominous black material that has no clear origin. The material leaves streaks on the barrel, giving the impression that it was viscerally torn out of something. The trigger guard appears to be either a thin rib partially covered in the black material, or a bent protrusion on the barrel connected to the back of the gun by a thread of black flesh. Two bat-like wings protrude from the back of the weapon, but they seem to be purely aesthetic.

The Spine Snapper's associated revolver has a black frame with dark brown accents, bone-white details (including the barrel), and a small bayonet.

The Spine Snapper has the third-lowest Attack and Magic Attack of any gun, as well as a small HP penalty and an elemental weakness. However, it partially compensates for its frailty with a first-class boost to Evade, and it can summon a Beheaded Fallen between turns to deal part-Dark physical damage to a foe while simultaneously granting a good amount of Brave stacks to the entire party (including backup). Although it has a fairly low trigger chance, the auto-summon can be used with Sharpen and other effects (such as the more cost-efficient Roasted Gloop summon) to maintain Brave more consistently while Lance supports the party in other ways.

The Spine Snapper is the only gun with a debuff-boosting effect, and Lance can make excellent use of it; he can learn all major debuff skills aside from Screamer and inflicts defensive debuffs with his main elemental skills (Bullet Hell, Plasma Field, and Antimatter Flux). Coupling it with the Cardboard Box and the Coat of Teeth will give Lance the ability to apply serious debuffs to his enemies while simultaneously letting his magic attacks hit a little harder, forming a solid base for an offensive support build (especially with Haste support to help him fire off Hyper Beam more frequently).

The Spine Snapper is also very effective in a status build; it increases Lance's status infliction, and its weapon-elemental skills have a decent chance to inflict Instant Death. When combined with other status-increasing gear and either Double Shot or Hyper Beam, it has a very high chance to kill anything without significant Death resistance, even before Good Luck and Bad Luck are factored in. Lance can also learn a fair few status-inducing skills, like Bubble Blast, Electron Gun, or Sand Dune, but Anna remains better for widespread status spam due to Arrow Rain and Combo Shot; the Spine Snapper's status build works best when Lance focuses on its Death-inflicting capabilities.

The Spine Snapper resists Dark, Death and Doom, though it is also vulnerable to Holy. It becomes immune to Death and Doom at Level 5, but its Holy weakness remains constant no matter its forging level.

The Alt Spine Snapper is an unnatural support gun with a mixed bag of stats and effects. It combines the HP penalty of the Alt Accelerator with the Accuracy penalty of the Alt Flame Titan on top of subpar Attack and Magic Attack; to make matters worse, it's guaranteed to afflict Lance with Bad Luck every turn. On the other hand, it has the best Evade among guns in Equip Remix, it counters attacks with Snipe to compensate for its Accuracy penalty, and its Weapon-elemental skills (including its counter attack) drain HP while having a fair chance of inflicting Instant Death. When fully upgraded, it also gains a status boost, improving its chances of killing foes instantly.

The Alt Spine Snapper is mainly useful in a full status build, where Lance's Hyper Beam will be guaranteed to inflict Instant Death on enemies with less than 70% resistance (and even enemies with 70% resistance won't be safe if Good and Bad Luck are also applied). This allows Lance to quickly clear out enemy waves as long as his allies give him extra actions through Encore and the Cat Ninja summon; alternatively, his other weapon-elemental skills can be used to pick off individual foes. Until it's fully upgraded, Lance should avoid sources of Doom (including the Cursed Land weather), lest his constant Bad Luck turn the incoming status into Instant Death.

The Alt Spine Snapper resists Dark, Death and Doom, with the latter two becoming an immunity at Level 5. It is also weak to Holy, with the degree remaining constant no matter its forging level.

The Spine Snapper is found inside a chest in the Forgotten Temple of the Forgotten Ruins; the chest is behind a diamond block, so a Diamond Key is required to access it.