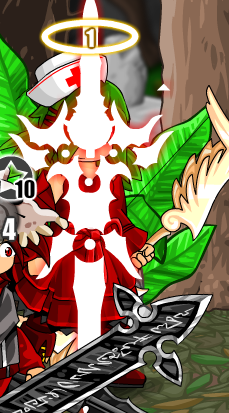 Temper is a stat-buffing skill available for Matt in the Epic Battle Fantasy series.

After Matt does his casting animation, a giant sigil resembling an elaborate sword briefly appears over his target, accompanied by three small arrows pointing upwards. Both the sigil and arrows are pure white with a faint red glow.

Temper provides a great buff to the target's Attack, which will gradually fade by 5% per turn. In later games, it also gives the recipient three stacks of Brave to further increase their offensive output (and, in EBF5, prevent them from having their Attack buff negated or dispelled). Although Matt himself seems like the best target (in fact, he can only target himself in the first two games), it's more efficient to cast Temper on a physically-inclined ally (such as Anna or NoLegs) so they can immediately exploit its full power.

Temper is part of Matt's Special skillset. It automatically targets him when cast, and it boosts Attack to 50%. Prior to the EBF Collection update, the description also erroneously said it boosted by 40%.

Temper's description was fixed to describe the degree of its buff; aside from that, it's largely the same as its EBF1 version.

Temper can now be cast on any party member, instead of only Matt. It is available from the start of the game at Level 1.

This section is incomplete. You can help Epic Battle Fantasy Wiki by adding required information to it.
To do: More info.

Temper now confers the Brave status effect to the target in addition to the Attack boost. Compared to its EBF3 version, it costs a little less AP to upgrade to its final level.

Temper is similar to its EBF4 incarnation, but its MP cost has been replaced by a 1-turn cooldown. On the other hand, the introduction of buff-boosting Equipment Effects allows Matt to raise the target's Attack even higher than before; with three buff boosts, he can double an ally's Attack on top of providing Brave.