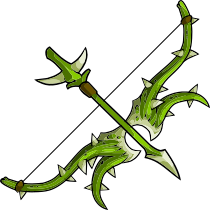 The Stinger is a Bio-elemental bow available for Anna in Epic Battle Fantasy 5.

The Stinger is made of vines from a thorny, presumably poisonous plant, with each limb being made of two vines growing from a hard central grip of uncertain origin. The vines' green coloration suggests that they are still alive despite a lack of roots or leaves; presumably, they are sustained by magic. The bow string is secured to the tips of the longest vines by tiny brown pieces, possibly some sort of Leather.

The Stinger's arrows are predominantly green, with thorns for a head and fletching. A small brown section is present above the tail, presumably for better grip.

The Stinger appears to be the heir to the Thorn Bow throne, both aesthetically and in terms of stats. It is tied with the Iron Tusk for the highest Attack boost of any bow in the game; it also provides a minor defensive perk by somewhat raising Evade. However, it reduces Anna's Magic Attack by 20%; this mostly hampers her healing spells, since the bulk of her offense is physical.

The Stinger can cast Razor Leaf between turns and occasionally unleashes Vines with weapon-elemental attacks, allowing Anna to pressure foes with strong skills that benefit from its massive Attack stat and boost to Bio skills. It can also inflict Stun on hit; while Spark Shower still works better for single targets, Arrow Rain becomes a more reliable means of immobilizing an entire wave of foes. With that being said, its main focus should be pure physical offense, as Thor's Hammer has an even better Stun chance.

The Stinger provides resistances to Bio and Dark, which do not become an immunity at Level 5. It also has a consistent 30% weakness to Burn and Scorch, although this only increases the odds of Anna being afflicted, not the damage they'll inflict.

The Alt Stinger's stats are balanced but unimpressive: minor Defence and Magic Defence, negligible HP and Evade, and offensive stats on par with the Alt Juggernaut (which is to say, very low). However, it compensates for this with a frightening proficiency in plaguing foes over time - emphasis on "plague."

The Alt Stinger's weapon-elemental attacks have a great chance to inflict Virus, allowing Anna to rapidly stack the status on a single foe with Combo Shot or bombard an entire wave of enemies with Arrow Rain. Its single-target weapon-elemental skills may also unleash Ivy Wrap to deal further damage with a serious risk of Stun and a massive Evade debuff; its high Accuracy also makes it an effective counter to foes with naturally high Evade or the ability to buff the stat. Between turns, the bow can also cast Toxic Bubble to damage and Poison a random foe, adding to its long-term damage output.

While the Alt Stinger obviously has immense worth as part of a Virus strategy (essentially acting as the Equip Remix equivalent of the Biohazard Blaster), it can be an effective support weapon even outside of that niche. With the right Flairs, Anna can apply other statuses to better harass her foes and support her allies' attacks while still inflicting Poison, Stun, and Evade debuffs through the bow's automatic skills. Its poor defensive stats are somewhat mitigated with its combination of Bio absorption and self-Poisoning, giving Anna a makeshift Regen.

The Alt Stinger is incredibly resistant to Bio, to the point of absorbing it at Level 4 and 5. However, it also amplifies incoming Fire damage by 30%, no matter its forging level.

The Stinger is found inside a chest in the Deathly Hollows, right at the entrance. The chest is hidden behind a rock wall and reachable only through a hidden passage; the passage is also blocked by boulders that can be smashed by The Hammer.