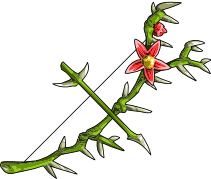 The Thorn Bow is a Bio-elemental bow available for Anna in Epic Battle Fantasy 4. It is exclusive to the Steam release of the game and the post-Battle Mountain update version of the Premium Pack.

The Thorn Bow is made from a green branch covered in white thorns; the branch forks on the upper limb, making the bow vaguely resemble a "y" in silhouette. The upper limb also has a large flower with a yellow center and five red petals arranged in a star shape; a small red flower bud is visible further along the limb. The Thorn Bow's arrows appear to be made from straight twigs from the same plant, with curved white thorns acting as a head and "feathers".

Unlike most Bio-based weapons, the Thorn Bow cannot inflict the Poison status on its own (although its bonus skills have a small chance to do so). Instead, it focuses on direct physical damage with a great boost to Attack; conversely, its Magic Attack is on the weak side. It empowers Bio skills, including its own bonus attacks; it can unleash Thorny Vine with single-target weapon-elemental skills and occasionally casts Thorny Vines between turns. Both skills complement the bow's stats and the other Bio skills Anna can learn, but the bow is also useful as a generalist weapon due to its high Attack.

The Thorn Bow provides resistance to Bio and Poison, with the latter becoming an immunity at level 5.

The Thorn Bow is found on Battle Mountain in the bottom-right chest on the Rainbow Rafflesia screen. The Stepladder is required to get this far, and the chest is accessible after beating the eight-wave foe rush with foes from Lankyroot Jungle.