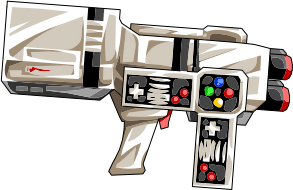 The Ultra Zapper is a non-elemental gun available for Lance in Epic Battle Fantasy 4.

The Ultra Zapper is a predominantly white gun that appears to incorporate several vintage video game consoles in its design. What appears to be a Nintendo Entertainment System forms its buttstock, and its front grip is formed from two NES controllers attached to a square projection with four colored lights/buttons. It has two short black barrels with red-orange tips, the latter matching the color of its trigger.

The Ultra Zapper is a weapon with solid offensive power, but is most useful for its impressive resistances. It offers above-average Attack and Magic Attack as well as a massive boost to MP. It is capable of draining MP with weapon-elemental skills, and single-target ones may cast Solar Flare. This allows Lance to seamlessly regenerate MP after using any number of skills simply by using a weapon-elemental attack, though just eating Food would work instead.

The Ultra Zapper can generally be replaced by other pieces of equipment. In terms of offenses, it is outclassed by the Shadow Blaster; the Thunder Core offers good MP and an useful elemental boost; if the player wants MP sustainability, they can eat a Cupcake. However, the Ultra Zapper's tri-elemental resistances can be paired with the Premium-exclusive Golden Armor to obtain absorption from three different elements. This makes it useful for a defensive weapon (especially against the Crystal Golem in the Battle Mountain Boss Rush), although it will still lack massive offensive potential.

The Ultra Zapper resists Fire, Thunder, and Ice. None of these become immunities at Level 5.

Found at the main entrance to the Waste Disposal Plant, in a chest blocked by a Steel Block.